ABOARD THE PAPAL PLANE  – Pope Francis is planning to change official Catholic Church teaching to declare the use and possession of atomic weapons as “immoral,” a move that makes clear that his rejection of the Cold War-era doctrine of deterrence is to be official church policy. 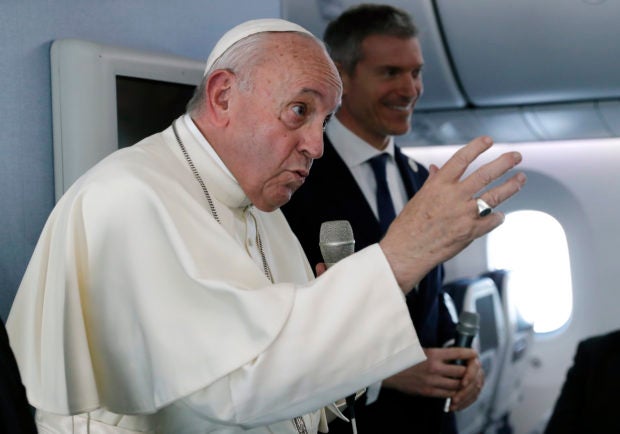 Pope Francis speaks during a news conference onboard the papal plane on his flight back from a trip to Thailand and Japan, Monday, Nov. 26, 2019. (Remo Casilli/Pool Photo via AP)

Francis had declared the possession of nuclear weapons immoral on Sunday in Hiroshima during an emotional encounter with survivors of the U.S. atomic bomb.

On Tuesday, during a press conference en route home from Japan, Francis indicated that his Hiroshima address should be considered part of his magisterium, or official church teaching.

“This must go in the Catechism of the Catholic Church,” he said, referring to the published compendium of official church teaching.

“Not just the use, also the possession,” he said. “Because an accident of possession, or the insanity of a leader or someone, can destroy humanity.”

Francis first articulated his opposition to the doctrine of deterrence in 2017, during a Vatican conference, when he said the possession of nuclear weapons was “to be condemned.”

The shift upended three decades of the Vatican’s tacit acceptance of nuclear arsenals. Starting in 1982, St. John Paul II had held that deterrence could be morally acceptable in the interim as long as it was used as a step toward mutual, verifiable disarmament.

In the ensuing years, however, the Holy See has watched as arms control treaties collapsed, new nuclear powers emerged and the policy of assured mutual destruction resulted in a permanent stockpiling of bombs.

Francis also went further Tuesday in his comments on nuclear energy, saying he would rule out its use until scientists can offer “total security” to ensure that accidents, natural disasters and “crazed” individuals won’t destroy humanity and the environment with nuclear fallout.

Francis offered his “personal opinion” that went beyond the “concern” he expressed in public a day earlier during a meeting with survivors of the 2011 Fukushima nuclear disaster.

The Japanese government strongly backs nuclear energy despite the 2011 “triple disaster,” in which three Fukushima nuclear reactors partially melted down after an earthquake triggered a tsunami. The disaster spewed nuclear fallout across the region and at one point forced the evacuation of 160,000 people.

“I have a personal opinion,” Francis said. “I would not use nuclear energy as long as there’s not a total security on the use.”