US criticizes China for abuses revealed by leaked cables 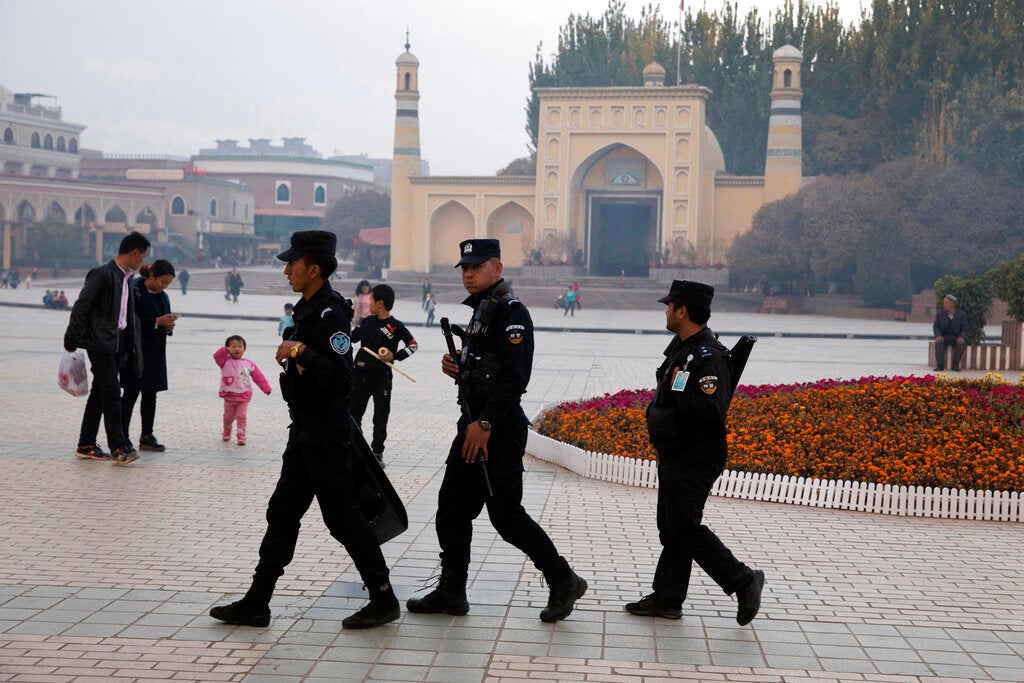 Uighur security personnel patrol near the Id Kah Mosque in Kashgar in western China’s Xinjiang region. Classified documents, leaked to a consortium of news organizations, lay out the Chinese government’s deliberate strategy to lock up ethnic minorities to rewire their thoughts and even the language they speak. (AP)

WASHINGTON — Secretary of State Mike Pompeo said Tuesday that a cache of leaked documents proves that Chinese authorities are engaged in massive and systemic repression of Muslims and other minorities in western China, as a number of foreign governments expressed serious concern about the scale of the campaign.

Pompeo said the documents underscored “an overwhelming and growing body of evidence” that China’s leaders are responsible for gross human rights violations in the Xinjiang region.

“They detail the Chinese party’s brutal detention and systematic repression of Uighurs and members of other Muslim minority groups in Xinjiang,” Pompeo told reporters at a State Department news conference. “We call on the Chinese government to immediately release all those who are arbitrarily detained and to end its draconian policies that have terrorized its own citizens in Xinjiang.”

Pompeo’s comments come at a delicate time in U.S.-Chinese relations amid ongoing negotiations to end a trade war and U.S. concerns about the situation in Hong Kong, where pro-democracy protests have turned violent with clashes between police and demonstrators. Notably, his criticism was not accompanied by a warning about possible sanctions for the mass detentions, although U.S. lawmakers are pressing for penalties to be imposed.

“There are very significant human rights abuses,” Pompeo said. “It shows that it’s not random. It is intentional and it is ongoing.”

The leaked classified documents were provided to the International Consortium of Investigative Journalists, which worked with The Associated Press and news organizations around the world to publish the material.

The documents, which include guidelines for operating detention centers and instructions for how to use technology to target people, reveal that the camps in Xinjiang are not for voluntary job training, as Beijing has claimed.

They show the camps are used for forced ideological and behavioral re-education. They also illustrate how Beijing uses a high-tech surveillance system to target people for detention and to predict who will commit a crime.

Voluntary job training is the reason the Chinese government has given for detaining more than a million ethnic minorities, most of them Muslim. But a classified blueprint leaked to the news organizations shows the camps are instead precisely what former detainees have described: forced ideological and behavioral re-education centers run in secret.

The documents lay out the Chinese government’s deliberate strategy to lock up ethnic minorities even before they commit a crime, and to rewire their thoughts and the language they speak.

The papers also show how Beijing is pioneering a new form of social control using data and artificial intelligence. Drawing on data collected by mass surveillance technology, computers issued the names of tens of thousands of people for interrogation or detention in just one week.

Pompeo said the documents should encourage other countries to come forward with their concerns.

U.S. allies were among the first to step up.

“We have serious concerns about the human rights situation in Xinjiang and the Chinese government’s escalating crackdown, in particular the extra-judicial detention of over a million Uyghur Muslims and other ethnic minorities,” a British Foreign Office spokesperson said. “We want to see an end to the indiscriminate and disproportionate restrictions on the cultural and religious freedoms of Uyghur Muslims and other ethnic minorities in Xinjiang.”

German Foreign Minister Heiko Maas told the German China-Cables team that “if indeed hundreds of thousands of Uighurs are being detained in camps, then the international community cannot close their eyes.”

In Brussels, the European Commission said it was calling on China “to uphold its international and international obligations and to respect human rights including when it comes to the rights of persons belonging to minorities especially in Xinjiang but also in Tibet and we will continue to affirm those positions in this context in particular.”

Japan’s foreign ministry said it believed ”freedom, respect for fundamental human rights and the rule of law, which are the universal value in the international community, are guaranteed in China as well.”

Meanwhile, there were indications that China was moving to destroy documentary evidence of abuses.

A man now living in exile said a Uighur cadre he knew had reached out to him in October. The cadre, who manages paperwork at a community-level office in southern Xinjiang, said that recently the government had ordered all papers to be burned and destroyed.

“All the shelves are totally empty,” his friend said. The man declined to be identified out of fear of retribution to him or his family.

The man said papers stored in such offices are forms filled in by government workers monitoring everyone in the community, containing sensitive personal information such as marriage status, residence registration and whether they are detained. Information from the forms are inputted into a database in a separate room in the office, while the forms themselves are stored on shelves.