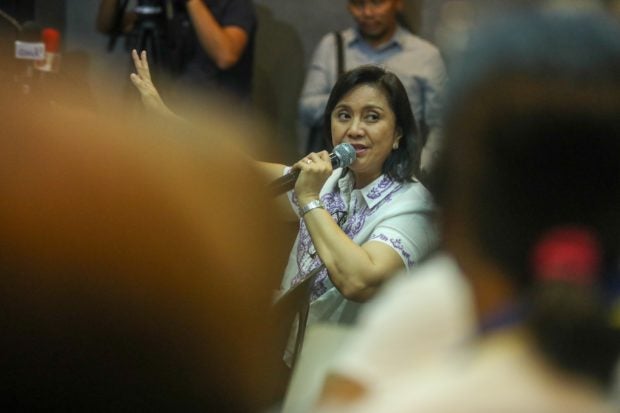 Vice President Leni Robredo meets with members of Mothers Against Drug Abuse (MADA) from different parts of Camarines Sur on Tuesday, November 26, 2019, in Naga City, to know more about the drug situation in their areas and the interventions that their respective authorities are undertaking to address this. Robredo underscored that it is important for communities to work together in providing mechanisms to help drug dependents, who surrendered to the government, recover from their addiction. (Photo by Charlie Villegas / OVP)

MANILA, Philippines — Vice President Leni Robredo on Tuesday said her removal as Inter-agency Committee on Anti-Illegal Drugs (ICAD) co-chair only furthered her desire to solve the drug problem in the country.

During a meeting with members of the Mothers Against Drug Abuse in Naga City, she promised to work even harder despite being stripped of the position in the government’s anti-drug body.

(For now, even if I’m no longer in the position, it doesn’t mean that I cannot do anything anymore. I was all the more inspired because I already saw what’s lacking.)

(Why do we need to help?  Because the problem of drugs is everybody’s problem – especially of mothers, right?  That’s why we cannot say that we’ll leave it to the PNP, right?  What we need to say is that ‘There is a problem, and all of us would help’.)

On November 24, Malacañang said that President Rodrigo Duterte has fired Robredo from her ICAD post. Duterte earlier said he distrusts the Vice President.

Duterte designated Robredo as a co-chair of ICAD on October 31, after he got frustrated with Robredo’s supposed call to stop the drug war.  She later on clarified that she was only seeking a reassessment of the drug campaign, citing that illegal drugs remain prevalent in the country despite claiming the lives of thousands of people in the name of the Duterte administration’s drug war.

She also called on ICAD to stop the senseless killings, including a proposal to replace Oplan Tokhang, the Philippine National Police’s prime anti-drug program.

Further, Robredo advocated for the production of baseline data on the drug war and urged other localities to copy good practices of local government units such as Quezon City and Dinalupihan in Bataan.

Duterte can’t trust Robredo? ‘Obviously, he wants her out’ – Lacson