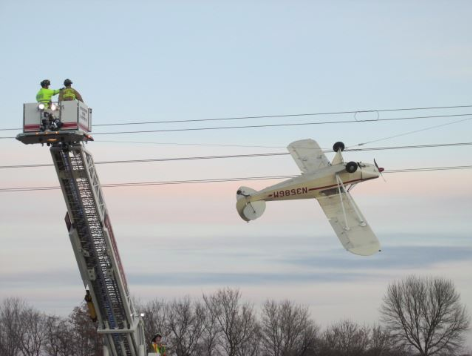 A plane crashed into some power lines in Minnesota and was left hanging upside down. Image: Courtesy of Scott County Sheriff’s Office

By a stroke of luck, a man from Minnesota survived what could have been a deadly crash of a plane through power lines.

Thomas Koskovich, 65 years old, was rescued by the Scott County Sheriff’s Office last Saturday afternoon, Nov. 23, from the accident. Koskovich’s single plane engine struck a cluster of power lines and was left suspended upside down, as per the office’s statement on the same day.

The authorities were quick to respond on the scene with the help of the fire department, an electricity company and ambulance. The pilot was rescued from the airplane after the power lines were de-energized. The plane was reportedly traveling south and was solely manned by Koskovich.

Meanwhile, the investigation of the plane crash has been turned over to the Federal Aviation Administration, as per report.

“This incident could have been much worse,” Scott County sheriff Luke Hennen was quoted as saying. “We are grateful the pilot was able to walk away without any injuries.” Cha Lino/JB