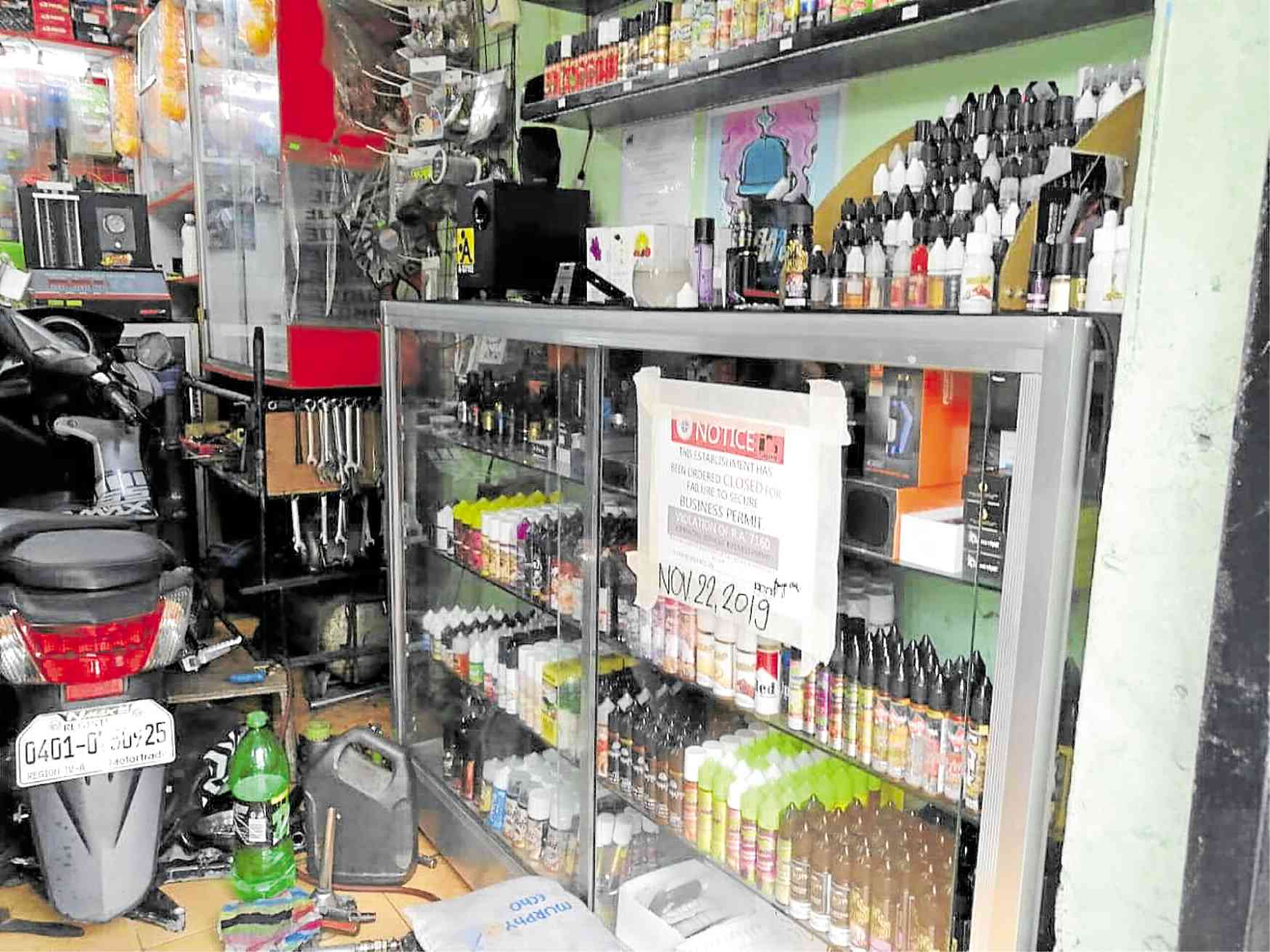 CLOSED, FOR NOW A notice posted inside a vape shop informs the public that the establishment has been shut down for operating without a permit. —PHOTO FROM TAGUIG PUBLIC INFORMATION OFFICE

MANILA, Philippines — More vape shops in Taguig City may be closed in the next days as officials said they would continue conducting surprise checks on these establishments after the President gave a verbal order banning the use and importation of e-cigarettes.

In a statement, the Taguig City government, through its Business Permit and Licensing Office (BPLO), said that seven vape shops were closed on Friday.

The Inquirer learned that four of the shuttered vape shops were operating without a business permit.

Two of these were on General Luna Street at Barangay Tuktukan, a few meters away from City Hall. Another was on C-5 Service Road at Barangay Pinagsama while the fourth shop was on M.L. Quezon Avenue at Barangay Hagonoy.

The BPLO conducted the surprise inspections in the wake of Mr. Duterte’s order banning the use in public and importation of vaping products after health officials confirmed the country’s first case of electronic cigarette-associated lung injury.

“[The President] explained that the government has the power to issue measures to protect public health and public interest,” the statement from City Hall said.

The inspections were conducted a day after Duterte visited the Taguig Center for the Elderly at Barangay North Signal Village on Thursday.

An owner of one of the vape shops had questioned the basis for the closure when, according to his knowledge, the President had banned only vaping in public places.

He tried to reason out with a police officer who told him that there was a city ordinance banning the sale of vaping products.

“I did not argue anymore, otherwise my products would be confiscated,” the vape shop owner said in a Facebook post.

Taguig City has banned smoking in public since 2007 through an ordinance, which was amended in 2017 to include electronic nicotine delivery systems (ENDS) such as e-cigarettes and vaping devices.

City Ordinance No. 15, series of 2017, or the Comprehensive Smoke-Free Ordinance of Taguig City prohibits selling, advertising and promoting cigarettes and ENDS within 100 meters from the perimeter of any school, public playground, any office of the Department of Health (DOH) and attached agencies, hospitals and health facilities.

There is also a ban on smoking and vaping in all forms of public conveyances, government-owned vehicles, accommodation, and entertainment establishments, workplaces, enclosed or partially enclosed public places, public buildings, and public outdoor spaces within the city.

The sale of vape and other related products to minors is also illegal. Violators face a fine of P1,000 on the first offense and P3,000 on second offense. For third time and subsequent offenders, they will be fined P5,000 while their business permits will also be revoked.

On petitions platform Change.org, a petition calling on the DOH not to ban and “only regulate” vaping has so far gathered over 13,000 signatures as of Sunday afternoon.