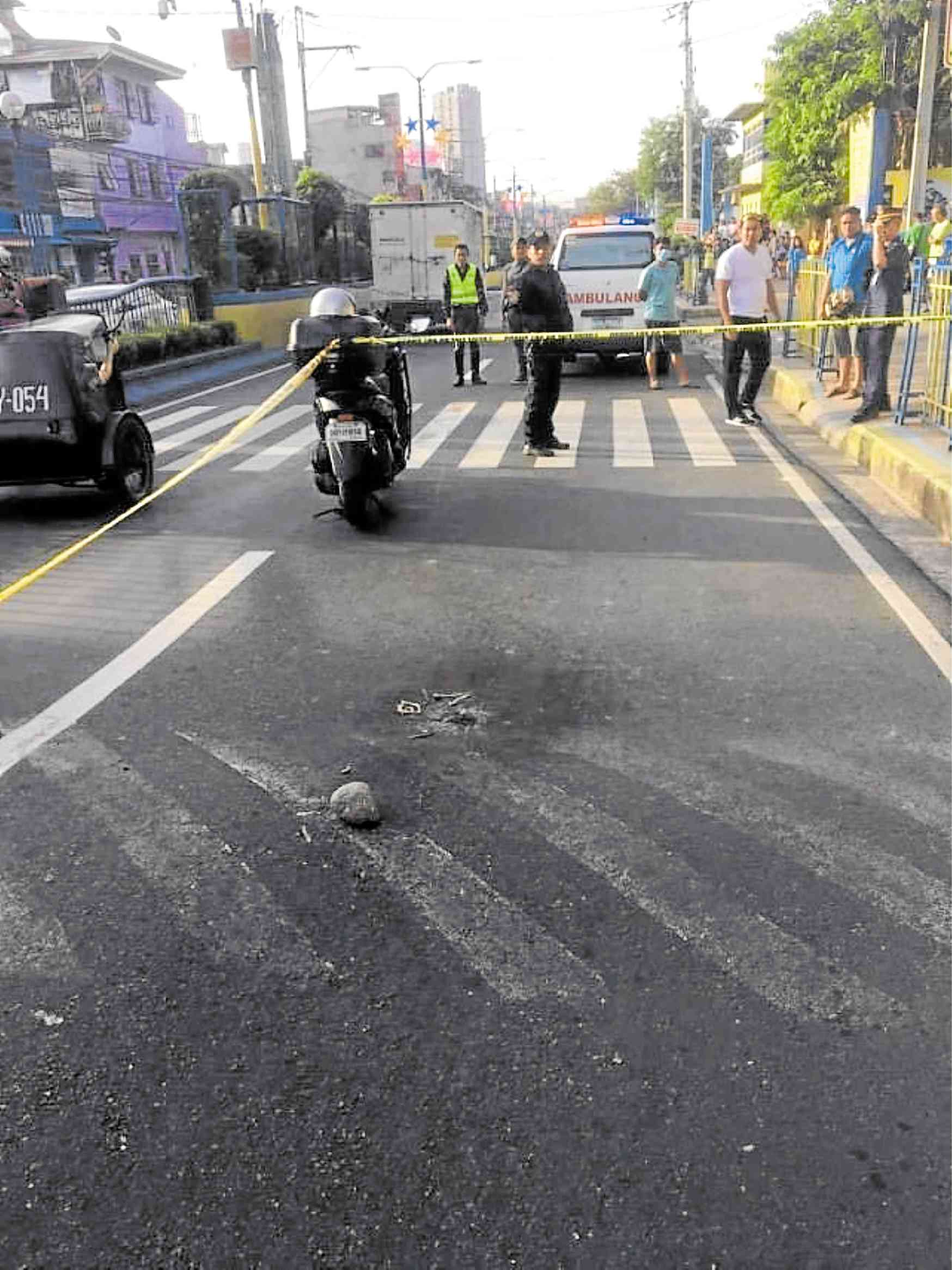 SITE OF EXPLOSION Blast marks show the spot where a grenade blew up on Sunday morning. —PHOTO FROM MANDALUYONG BUREAU OF FIRE PROTECTION

MANILA, Philippines — A grenade explosion on Sunday morning in Mandaluyong City that killed one and injured three others could be part of an ongoing plot to “liquidate” antidrug operatives, said the city police chief, Col. Remigio Sedanto.

The fragmentation grenade was planted on the engine of a motorcycle owned by Police Staff Sergeant Aldin Saligo, a member of the Mandaluyong police’s Station Drug Enforcement Unit (SDEU).

The grenade, however, fell off the motorcycle after Saligo passed a hump on F. Martinez Street. It exploded quickly after, leaving the policeman unhurt but killing Roger Avila Barcelo, 37, a passenger in a tricycle behind him.

Another civilian on a motorcycle near Saligo, 32-year-old Rogelio Tolentino, remained under observation at Mandaluyong City Medical Center (MCMC) due to critical injuries after fragments of the grenade entered his body, Sedanto said.

Mandaluyong City police, fire officers and scene of the crime operatives had responded to the blast, which occurred around 6:30 a.m., according to a police report. It added that Saligo was on his way to his place of assignment for the Southeast Asian Games when the explosion occurred.

Sedanto told the Inquirer that, according to confidential police informants, leaders of a certain drug group in Mandaluyong had ordered their foot soldiers to kill SDEU operatives in the city.

“The group leader instructed them to liquidate, first of all, those who failed to remit drug money. Another order of the group leader, though, was to liquidate SDEU operatives,” said Sedanto, who did not name the drug group but said it had long been operating in Mandaluyong.

Saligo was an intelligence operative in the city before recently being moved to the SDEU. He has confirmed previously receiving death threats in line with his work.

“We already have names from the drug group, subject to intelligence buildup,” Sedanto said. “These are personalities who were already listed at the height of ‘Tokhang’.”