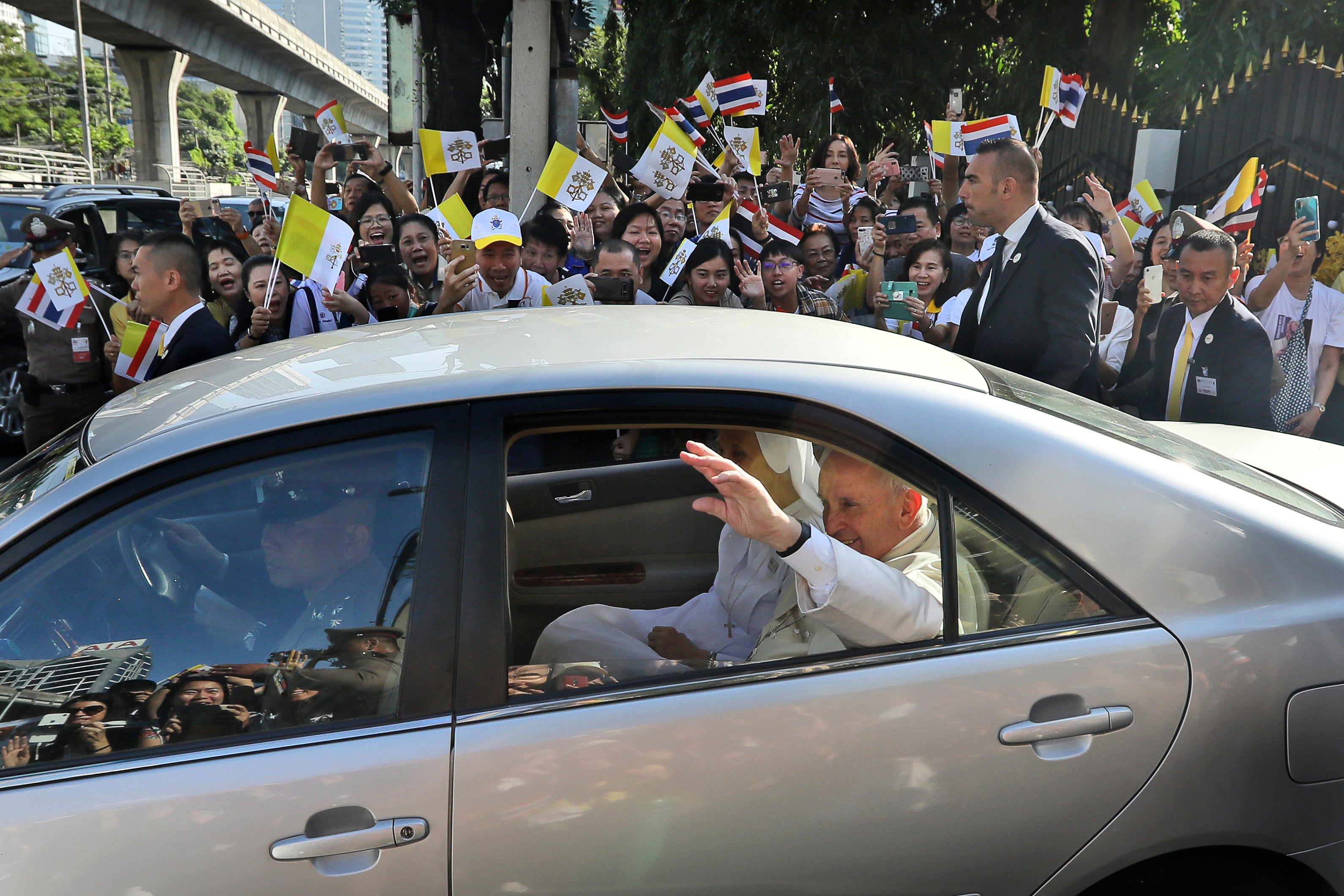 Pope Francis waves to people waiting on the side of the road to bid farewell as he leaves for Japan from Bangkok, Thailand, Saturday, Nov. 23, 2019. Pope Francis will fulfill his dream to be a missionary in Japan when he arrives for a three-day visit with two main aims, to appeal for nuclear disarmament and minister to a tiny Catholic flock with a rich, bloody history. (AP Photo/Manish Swarup)

TOKYO  — Pope Francis will fulfill his dream to be a missionary in Japan when he arrives for a three-day visit with two main aims: to appeal for nuclear disarmament and minister to a tiny Catholic flock with a rich but bloody history.

Francis traveled Saturday from Thailand to another Asian country where Catholics are a minority — less than 0.5% of Japan’s 127 million people, most of them loosely affiliated with Buddhism or Shinto, or both.

The community he will find has changed dramatically in recent years with an influx of foreign workers. Today, these temporary workers make up more than half of Japan’s Catholic population of 440,000, according to the Archdiocese of Tokyo’s international center.

Francis will minister to them at various points over the coming days, including in Nagasaki, which remains a center of Catholicism centuries after St. Francis Xavier first brought Christianity to the archipelago in 1549.

One of the highlights of the trip will be Francis’ prayer Sunday at the memorial of the 26 Nagasaki Martyrs, who were crucified in 1597 at the start of the two-century wave of anti-Christian persecution by Japanese rulers.

Francis will also greet descendants of the “Hidden Christians,” who persevered in their faith for generations despite the threat of death and the absence of priests.

Their courage helped inspire a young Jesuit priest named Jorge Mario Bergolio to be a missionary in Japan. The future pope was denied due to health issues.

Francis’ Japanese agenda is somewhat upside down compared to a usual papal trip, when meetings with the head of state in the capital come first, followed by other events out of town.

In Japan, Francis instead will head to Nagasaki and Hiroshima first thing Sunday, visiting the sites of the atomic bombings. It doesn’t appear an accident of the itinerary.

Francis has gone further than any other pope by saying that not only the use but the mere possession of nuclear weapons is “to be condemned.” He’s expected to issue a strong appeal for total nuclear disarmament Sunday, and will likely repeat that message when he meets with victims of the 2011 Fukushima nuclear disaster on Monday — before he calls on Emperor Naruhito or Prime Minister Shinzo Abe.

“He is a super diplomat who extends secular global messages that go beyond religious messages,” said Kagefumi Ueno, former Japanese ambassador to the Holy See. “Those issues are universally shared by the international community.”

But Francis’ key aim is to tend to his tiny flock, which has grown exponentially more diverse in recent years.

Japan had long kept its door closed to immigrants, but the country last year adopted a new policy to open up unskilled jobs to temporary foreign workers, a major revision to the country’s policy to deal with its rapidly aging and declining population.

Many of the newcomers hail from the Philippines, Vietnam, and Brazil and are Catholic, rejuvenating local churches that now offer Masses in English, Tagalog, Portuguese, Spanish and Vietnamese.

Francis has made welcoming migrants a hallmark of his papacy, so he will likely refer to these newcomers in at least some of his speeches — including on Saturday evening when he addresses Japanese bishops.

“Japan has accepted only an extremely small number of refugees and has fallen far behind global standards, so I’m hoping the pope will touch on the issues,” said Kanae Doi, Japan director of Human Rights Watch. “It would be great if he discusses those issues and raise awareness about the role Japan is expected to play as part of the international community.”