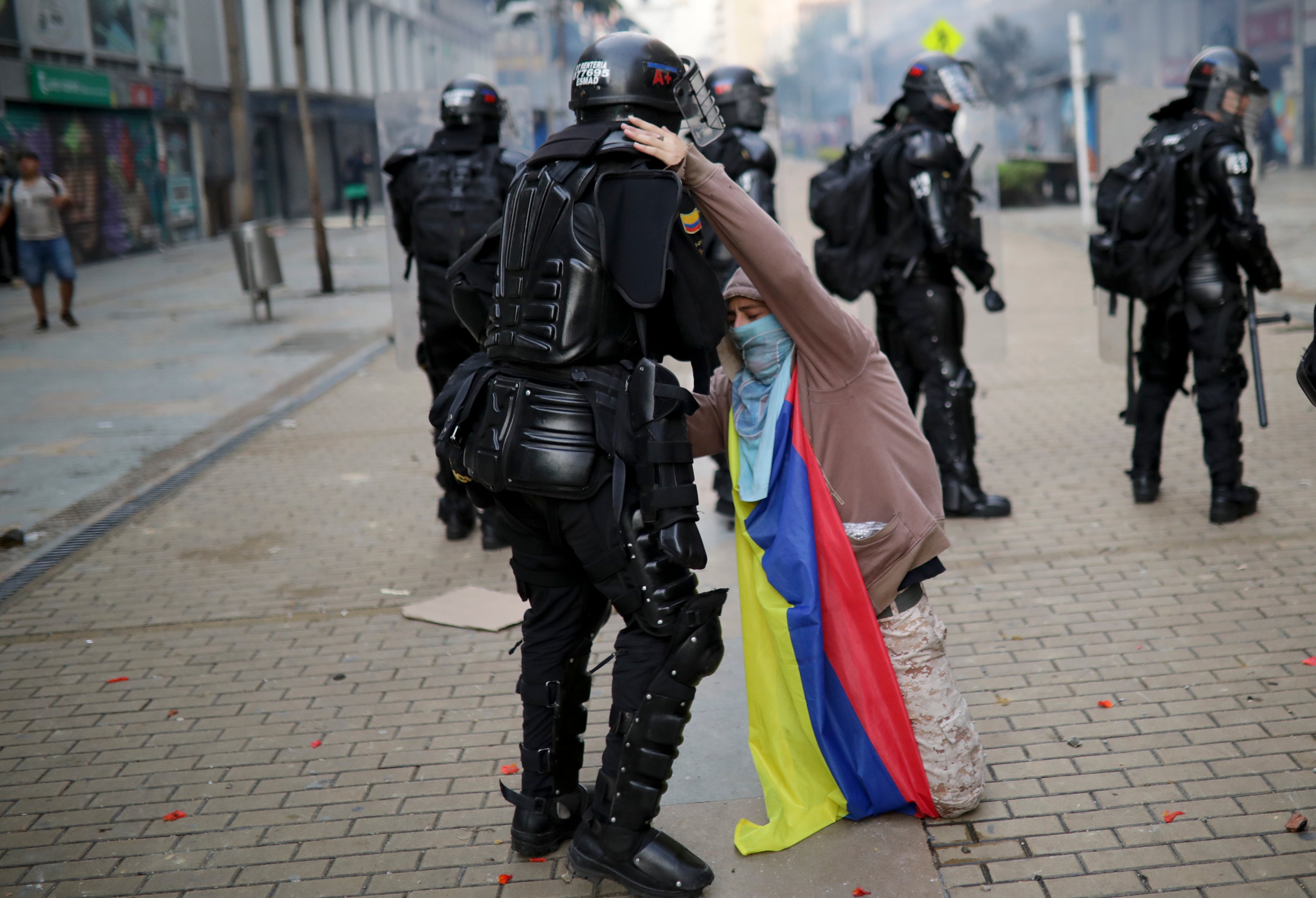 An anti-government protester kneels before a police officer in Bogota, Colombia, Friday, Nov. 22, 2019. Labor unions and student leaders called on Colombians to bang pots and pans on Friday evening in another act of protest while authorities announced three people had died in overnight clashes with police after demonstrations during a nationwide strike. (AP Photo/Ivan Valencia)

BOGOTA, Colombia  — Colombian President Iván Duque ordered a curfew in the nation’s capital Friday amid continuing unrest following a massive march a day before that brought tens of thousands to the streets in a strong message of rejection against his conservative government.

The president announced on Twitter that he has requested that Bogota’s mayor enforce a curfew beginning at 9 p.m. in all of the city of 7 million after police pushed back thick crowds of protesters banging pots and pans in the storied Plaza Bolivar.

“They kicked us out with tear gas,” said Rogelio Martinez, 38, a construction worker. “They didn’t want the people to show their discontent.”

The curfew comes one day after an estimated 250,000 people took to the streets in one of the nation’s biggest marches in recent history. While the protest started out peaceful, it ended with scattered clashes between protesters and police. Three people were killed in what authorities described as violent looting incidents overnight.

Clashes continued in part of Bogota and in the southwestern city of Cali on Friday as volunteers wiped graffiti off historic buildings and swept up shattered glass.

The upheaval comes as Latin America is experiencing a tide of discontent, with massive demonstrations in countries including Chile, Bolivia, and Ecuador where citizens frustrated with their political leaders are taking to the streets.

The protests defy easy categorization and it remains unclear if Colombia’s will persist.

Defense Minister Carlos Holmes Trujillo said that as of Friday morning, 98 people had been detained and 151 police and military officers injured, as well as 122 civilians, most of whom suffered minor injuries and tear gas inhalation.

The minister said two individuals were killed in the port city of Buenaventura after police were attacked while responding to looting at a mall. A third died in Candelaria after police said a group looting a supermarket shot at officers.

The names and causes of death of those killed were not released.

Duque convoked a special meeting with his ministers Friday but did not immediately respond to protesters’ demand for a meeting. In an address after the protest, the president said he had heard the day’s outcry and supported talks with all sectors.

“Duque recognizes there is plenty to do,” his defense minister said.

Protest organizers urged Duque to establish a dialogue with indigenous, student and labor groups to discuss potential reforms and criticized him for not directly addressing demonstrator complaints in a late-night address.

“If they don’t decide to govern in favor of the majority, the discontent will continue accumulating,” student leader José Cárdenas said.

Recent polling indicates Duque has a 26% approval rating 15 months into his administration as the nation grapples with implementing a complicated peace process with leftist rebels, ongoing violence between illegal armed groups and long-simmering tensions over issues like corruption and inequality.

“Colombia is facing a set of complex problems that are as difficult as any in its recent history,” said Cynthia Arnson, director of the Latin America program at the Woodrow Wilson International Center for Scholars. “I think any political leader faced with this array of problems would have a difficult time.”