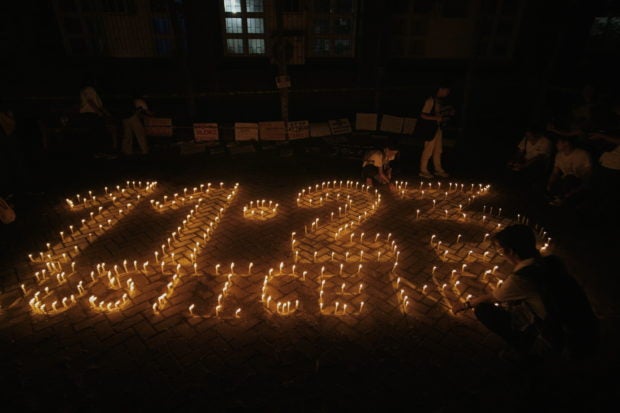 Student journalists of Bicol University lighted candles in memory of those who were killed in the Maguinadanao massacre 10 years ago. The young aspiring journalists have yearly staged commemorations for the victims of the massacre. Photos by George Gio Brondial, Inquirer Southern Luzon

LEGAZPI CITY—Campus journalists of the Bicol University (BU) joined the nationwide commemoration of the 10th year of the Maguindanao Massacre, recreating the ghastly scene that shocked the nation 10 years ago—a shrub-filled land littered with more than 50 bodies with blood dripping from these, victims of the country’s most heinous political crime.

The BU students lit candles, offered prayers and used their imaginations to recreate a scene that is forever etched in the memories of relatives of those who were murdered—banana leaves stood for corpses, circular objects stood for human heads and white sheets splashed with red ink representing human blood.

“Justice is still not given until now and it seems like we should keep on asking for it instead of them giving it to us,” said Mary Joy Balunso, president of Bicol Organization of Neo-journalist (Bonjour), an organization of journalism students in BU’s College of Arts and Letters. 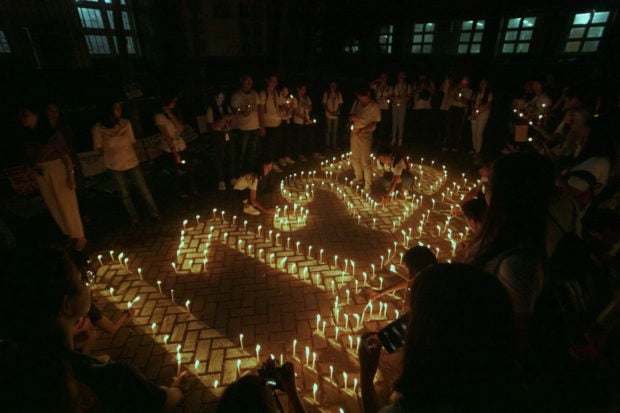 Geraldine Alburo, also a second year student, said that she and other journalism students cling to hope that the truth will prevail and justice will be served in the cases of 58 mostly journalists who were shot with automatic rifle fire when they joined a convoy on its way to the filing of candidacy of Esmael Mangudadatu as governor of Maguindanao on Nov. 23, 2009.

Among the dead were Mangudadatu’s wife, two sisters, journalists, lawyers, aides and motorists who happened to be at the wrong place at the wrong time.

Mangudadatu was challenging Datu Unsay Mayor Andal Ampatuan Jr., heir to the then powerful Ampatuan clan which had been tapped by the government at that time to help in the fight against Moro rebels and had been allowed to amass an armory of high-powered firearms, some of which were used on the massacre victims. Mark Francis Banay