BAGUIO CITY – Filipino literature and art subjects helped cadets of the Philippine Military Academy explore their compassion and humanity through the years, a PMA faculty member said on Thursday at an international arts conference here. 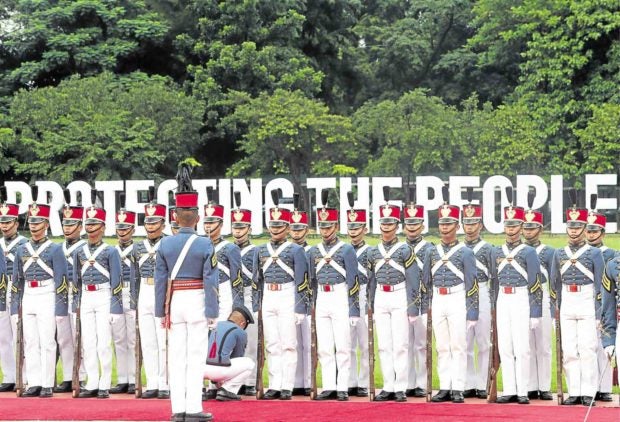 PROTECTORS OF THE PEOPLE The Armed Forces of the Philippines is instituting reforms to stop hazing at the Philippine Military Academy (PMA), where young men and women are molded to become protectors of the Filipino people.—EDWIN BACASMAS

But these subjects are gradually being replaced as PMA alters its curriculum along with mainstream colleges and universities to accommodate changes required by the K-12 basic education program, said PMA English instructor John Eric Tadeo.

Because PMA is administered by the AFP, the military school is not accountable to the Commission on Higher Education, which has required universities to remove general education subjects like Filipino, literature and arts appreciation, he said.

CHED issued a list of replacement subjects that would not duplicate general subjects offered by senior high schools, Tadeo said.

But because PMA is also a tertiary education institution, its subjects and curriculum “must approximate what CHED schools offer,” he said.

According to Tadeo, academy graduates have the option to pursue graduate and doctorate courses in major universities.

PMA made its first adjustment by starting its school calendar in August last year, which pushed back graduation from March to May this year.

Tadeo said some PMA teachers have managed to introduce art and literary elements in other subjects, which allow cadets to express themselves while undergoing training in the “art of warfare, nation building and military leadership.”

But losing subjects like Filipino literature, world literature and art aesthetics “is unfortunate,” he said.

According to Tadeo’s paper abstract, dropping these subjects from the PMA curriculum “may eventually lead to an aesthetics-less PMA learner should the innovations in and delivery of the remaining academic courses in the present curriculum fail to compensate for the creative avenues now found in senior high school subjects.”

“Some of my colleagues are hoping that during the process of curriculum overhauling [these subjects] will be integrated back because of the issues PMA is facing now,” Tadeo said at the conference.

Tadeo did not detail these issues at the forum.

The PMA is reeling from a series of tragedies this year involving the recent death of three cadets, including hazing victim Cadet Fourth Class Darwin Dormitorio.

Only the cadets who are taking third year and fourth year subjects next year will be covered by the old curriculum, Tadeo told the Inquirer.

Younger cadets have been using a new curriculum, which introduces subjects focused on national security, as well as foreign languages such as Mandarin, Nihonggo and Bahasa Melayu (Malaysian), he said.

Warfare is a crucial component of their education, but subjects like literature and art open up a cadet’s point of view and could show them that diplomacy also helps maintain peace, Tadeo said.

Tadeo said the PMA instructors who support his recommendations have yet to approach the PMA Corps of Professors and the AFP to lobby for the retention of the “creative” subjects.

But the paper was approved for presentation by the PMA.

Other universities that took part in the conference acknowledged that curriculum reforms to adjust to the K-12 program affected their own humanities and art departments.