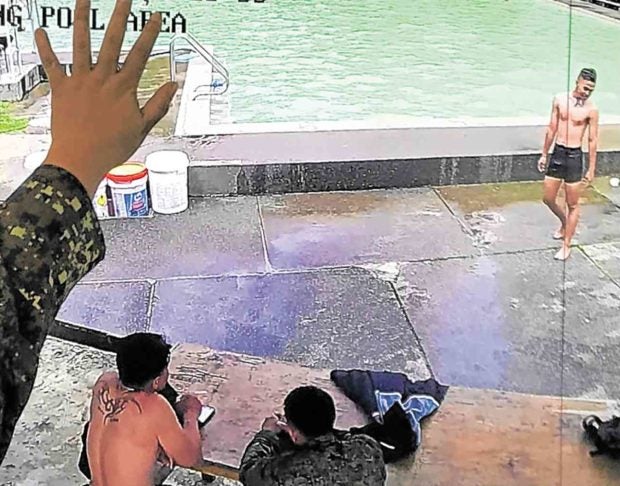 CASUALTY Cadet Fourth Class Mario Telan Jr., as seen in the right side of this security camera footage. —VINCENT CABREZA

BAGUIO CITY—Seven days after the burial of Cadet Fourth Class Mario Telan Jr., two of his swimming instructors were relieved for gross negligence in connection with the cadet’s drowning at the swimming pool of the Philippine Military Academy (PMA) on Nov. 8.

Robert Bete, a PMA faculty member, and instructor Antonio Catalan, who taught swimming to freshmen cadets, “were found negligent” and were ordered separated from the academy for gross neglect of duty, said Navy Capt. Cheryl Tindog on Friday.

Swimming lessons have been suspended pending the arrival of a team from the Philippine Navy Special Operations Group, which has been tasked to oversee “all waterborne training activities” for the cadets, Tindog said.

Aside from his dismissal, Bete lost his retirement benefits and is perpetually disqualified from holding public office.

Catalan, a job-order employee, has been “immediately terminated by the PMA” and will face the same sanctions as Bete, Tindog said.

Both instructors are also barred from taking civil service examinations.

The PMA is still reviewing penalties against two of Telan’s classmates who failed to account for his whereabouts.

Telan took part in a class swimming trial which ended before noon. He was found dead on the pool hours later.

Security cameras indicate that neither Telan’s fellow cadets nor the instructors were aware that he had not surfaced after he leaped into the water with his schoolmates.

The chief of the PMA’s Sports and Physical Development Unit is also being investigated for possible lapses on his part.

Telan was buried on Nov. 16 at his hometown of Enrile in Cagayan province. His family has yet to say if they would pursue charges against the instructors.

In an interview on Nov. 13, Telan’s mother, Edna, said the cadet had been the family’s “lifeline” because they live off a small farm.

“I am very upset at the military school’s negligence. When he was still alive, my son promised that he would help the family rise from poverty once he graduates and becomes a military officer,” Edna said in Filipino.

She added: “They (PMA) asked for forgiveness and they admitted their lapses but we already lost our son.”

Telan is a classmate of hazing victim, Cadet Fourth Class Darwin Dormitorio, who died on Sept.18, after a series of beatings that were revealed by his autopsy and witness accounts.