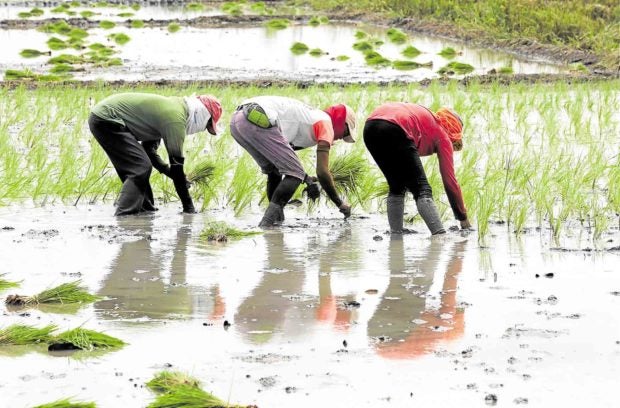 ‘DISENCHANTMENT’ In this Sept. 4 photo, farmers in Pulilan town, Bulacan province, plant rice even as their hopes for a sustainable livelihood fade with the market being flooded by imported grain. GRIG C. MONTEGRANDE

“When he (Duterte) suspended the rice importation, he gave us hope that the coming Christmas will be at least brighter compared to past ones. But we’re wrong, it’s another bleak Christmas for Filipino farmers,” Geronimo also said.

On Tuesday, Mr. Duterte said he would suspend rice importation until the end of the harvest season for the government to buy more palay from local farmers even if it meant losing about P3 billion.

But two days later, Mr. Duterte backpedaled on that policy and instead called for ramping up palay purchases and giving cash subsidies to small farmers.

Farmers are coping with low farmgate prices for palay following the enactment of the rice tariffication law in February, which allowed the entry of bigger volumes of imported rice.

“With his confusing policy statements it is becoming clearer that the President’s pronouncements can be issued any time as a populist response to the growing disenchantment of people, in this case, rice farmers,” Geronimo said.

He said the President “was just being true to himself” just like in 2017 when he cursed militant jeepney drivers opposing the government’s public utility vehicle modernization program.

“Remember his outbursts then that ‘kung mahirap kayo, wala akong pakialam, magtiis kayo!’ (if you are poor, I do not care, then suffer). The poor, therefore, should brace for more antipoor policies under this government,” Geronimo said.

“Rice and coconut farmers were both victims of Mr. Duterte’s betrayals,” he added.