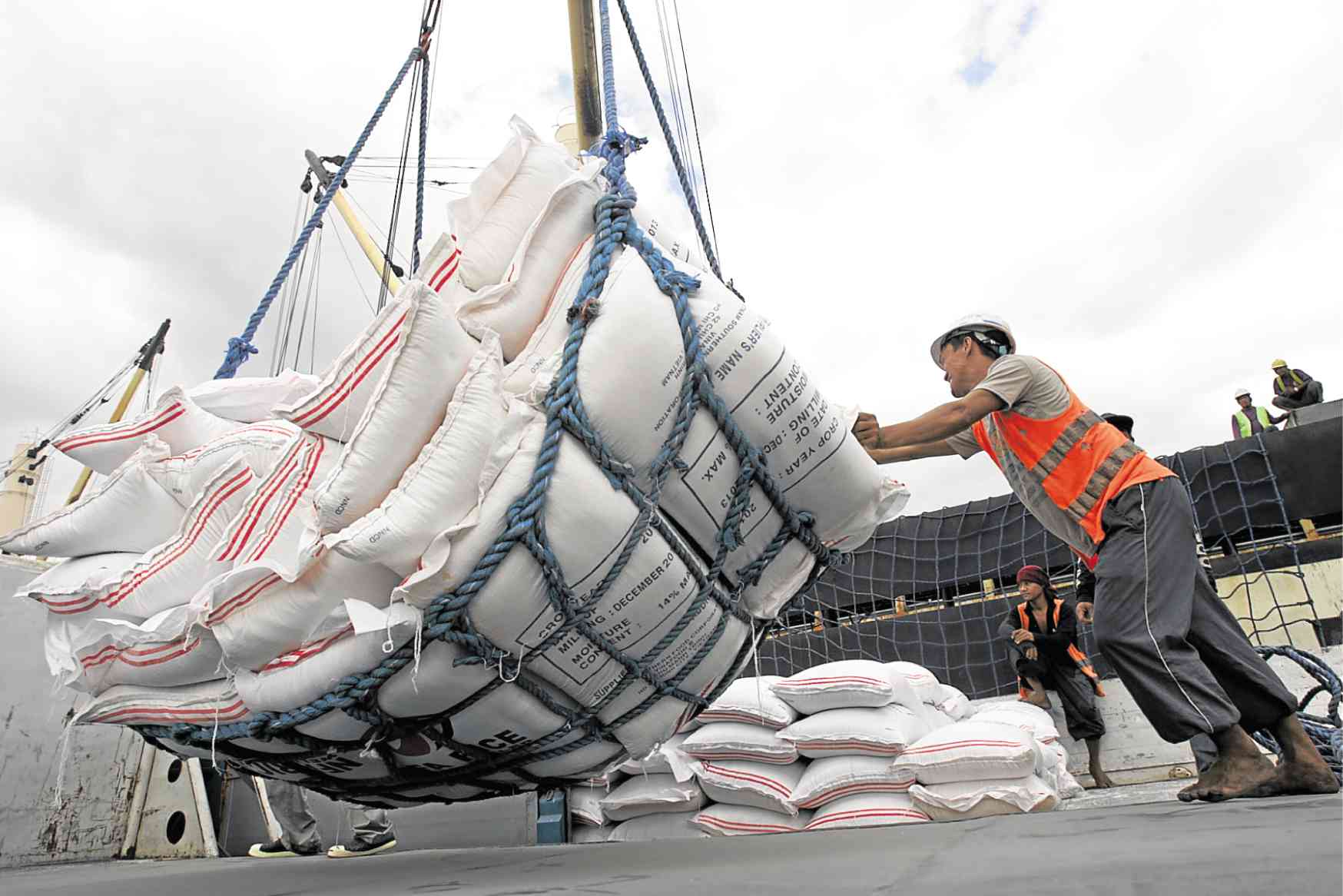 RICE FROM VIETNAM Workers at the Manila Harbour Center unload rice that the National Food Authority bought from Vietnam in the aftermath of Supertyphoon “Yolanda.” —INQUIRER FILE PHOTO

President Rodrigo Duterte has backpedaled on his pronouncement to suspend rice importation and instead called for ramping up palay purchases and giving cash subsidies to small farmers, Agriculture Secretary William Dar said on Thursday.

The President on Tuesday said he would order Dar to suspend the importation of rice until the end of the harvest season in the country and to buy more palay from local farmers even if it meant the government losing P3 billion from the purchases.

He issued the statement amid disquiet among farmers complaining about low farmgate prices for palay after the rice tariffication law allowed the entry of bigger volumes of cheap imported rice.

In Pangasinan province, more than 50 farmers in San Fabian town on Wednesday held a rally in front of the municipal agriculture office to seek help from the government as the price of palay continued to fall.

At a press conference, Dar said the rice tariffication law “will be pursued,” putting the President’s order on the back burner.

Republic Act No. 11203, which Mr. Duterte signed in February, imposes tariffs on imported rice in lieu of quotas, resulting in imported grain flooding the domestic market.

With quotas lifted, the Philippines has become the world’s biggest rice importer and is on track to rack up a record 3 million metric tons of the staple by the end of the year, according to the US Department of Agriculture.

As imports grew, the average buying price for palay hit P15.49 a kilogram in October—the lowest in eight years.

But government records showed that major rice-producing provinces like Bulacan, Nueva Ecija, Isabela, Tarlac and Cagayan had it worse, with palay selling for P11 to P14 per kg.

In San Fabian, members of the Aramal-Tocok Federation of Free Farmers Multipurpose Cooperative (FFFMPC) said the average farmgate price of newly harvested palay in the province had dropped from P15 to P13 per kg.

With P13 as the average production cost of palay, the farmers said they found it hard to recoup their losses.

The group noted that rice farmers could sell their harvest up to P24 per kg before the rice tariffication law took effect in March.

“The government must study the law and its effects on us since farmers are the ones directly affected,” the group said during the protest.

One farmer said that “if the government continues to ignore our plight, many local farmers will be forced to stop planting [rice].”

Ponciano Onia, a rice farmer and trader, said the government must suspend rice importation for a year to force private warehouses to release all of their stocks.

Amid the growing restlessness of the farmers, Dar called on the people to give the rice tariffication law a chance.

“Initially, there will be winners and losers. We are not going to stop it. We will implement the law properly,” he said.

At the meeting with Mr. Duterte, Dar said the guidelines for implementing the rice tariffication law were discussed.

“We understand the President is really looking at all angles and this is the directive: Strictly implement the guidelines in regard to the issuance of SPSIC (sanitary and phytosanitary import clearance),” the agriculture secretary said.

Since stricter guidelines on food safety were implemented, the volume of the country’s monthly rice imports had gone down by 67 percent to 85,000 MT from 245,000 MT, Dar said.

Assistant Director Glenn Panganiban of the Bureau of Plant Industry said the agency had issued around 3,000 import clearances this year, of which only 60 percent had been used.

The Federation of Free Farmers (FFF) said that limiting the issuance of SPSICs would not solve the industry’s woes in the long run.

Raul Montemayor, FFF national chair, said the government would eventually have to issue clearances to importers who would be able to comply even with stricter requirements.

Dar said the country’s rice industry would thrive with the implementation of the programs under the Rice Competitiveness Enhancement Fund (RCEF).

The fund is aimed at making Filipino farmers more efficient and cost productive so they could  compete with their counterparts in other Southeast Asian countries.

The RCEF provides an annual allocation of P10 billion to programs for boosting farmers’ productivity.

As of the second week of November, the Department of Agriculture said it had funneled 32 percent of the funds to implementing agencies.

The fund, however, is dwarfed by the P61.8 billion in losses that farmers have incurred so far due to the sharp drop in farmgate prices of palay. The Philippine Rice Research Institute estimated the losses.