Lacson: P14-B fund for ‘vague’ projects can be realigned to important programs 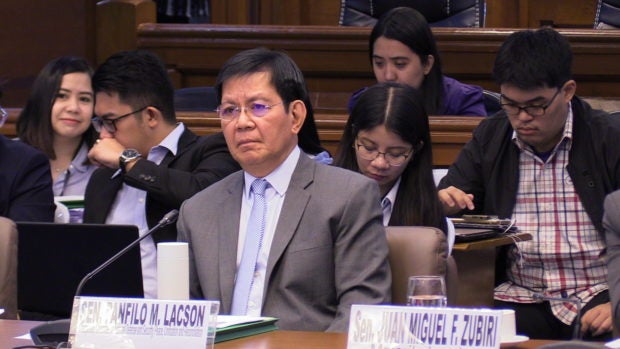 MANILA, Philippines — At least P14 billion in funding for “vague” infrastructure projects in the proposed 2020 national budget can be realigned to more important programs under three landmark laws of the Duterte administration.

Senator Panfilo Lacson said this after he pointed out that three laws signed under the current administration are “underfunded” namely the Universal Health Care (UHC) Act, the Universal Access to Quality Tertiary Education and the Philippine Identification System (PhilSys) Act.

(It’s such a waste. We have three landmark laws under the Duterte administration. UHC, free tuition for colleges and national ID. But all of them are underfunded).

(We can get funding from duplicative items in the GAB. Duplicative projects under the DPWH).

During his interpellation last week on the budget of the DPWH, Lacson scrutinized the agency’s budget supposedly riddled with typographical errors and questionable allocations.

(If we compute everything, although the DPWH said they would submit an errata because it was exposed during the deliberation that there are many projects with vague description but we will study if these could still be implemented because right now the disbursement rate of the DPWH is very low).

(The funds are not being utilized because there’s no consultation. These are inserted by legislators without consultation with the agency so the projects are not implemented properly).

(It may amount to P14 billion. So there could be a lot of source for funding to fill the gap).

At the beginning of the plenary deliberation of the proposed national budget, Lacson also suggested the realignment of P5-billion earmarked for the National Greening Program of the Department of Environment and Natural Resources (DENR) to the implementation of the national ID system.