In South Dakota, meth fighters welcome any help they get

SIOUX FALLS, South Dakota — South Dakota’s new anti-drug campaign drew plenty of mockery on social media this week for its “Meth: We’re on it” slogan, but according to local police, the attention couldn’t have come at a better time.

Law enforcement agencies in South Dakota are contending with a drug that is now cheaper and more potent, leading to a surge of use in the state and across the Midwest. Officers said preventing people from ever taking the highly addictive drug – a key goal of the campaign – is essential to stop the surge. 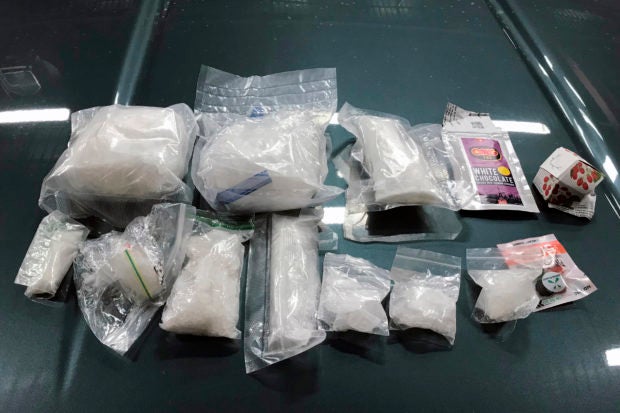 A selection of meth seized by the Pennington County Sheriff’s Office’s narcotics enforcement team is shown in an undated photo provided by the sheriff’s office on Tuesday, Nov. 19, 2019. South Dakota is taking aim at its persistent meth problem with a public awareness campaign that drew national attention this week for its “Meth: We’re On It” tagline. (Pennington County Sheriff’s Office via AP)

In South Dakota, the Drug Enforcement Administration said meth seizures are up a third over last year. Other agencies have made their own seizures and seen similar jumps.

The drug is known for being especially addictive and police said it’s often tied to violent crime. In Minnehaha County, which had more than 1,000 meth arrests last year, Sheriff Mike Milstead said meth is involved in many of the homicides he works. Both dealers and users carry guns to protect themselves in drug deals that can lead to violence, he added.

“I’ve been in this business a long time, and I would say I’ve never been more concerned about the safety of my officers and highway patrol officers of encountering dangerous individuals,” Milstead said.

After Congress passed laws aimed at clamping down on over-the-counter medications that could be used to make meth, the supply evolved from home-grown labs to Mexican cartels shipping in the drug.

According to the DEA, meth today is 71% cheaper than in 2005, with local police saying that meth is going for as little as $5 on the street.

Meth is especially problematic in the areas surrounding the two largest cities in the state, Sioux Falls and Rapid City. The DEA has designated those areas as high-intensity drug trafficking areas and awarded grants for special drug task forces. City and county agencies coordinate with federal law enforcement, including the DEA and the Department of Homeland Security.

Officers interviewed by Tthe Associated Press on Tuesday said they felt they had the resources needed and that the focus should be put on prevention.

That’s where Gov. Kristi Noem’s “Meth. We’re on it” campaign is trying to step in.

The state is spending nearly $1.4 million on the campaign that includes TV ads, billboards, and a website to direct people to prevention and addiction recovery. The state’s Department of Social Services is also planning to run educational classes in every middle school by next year, to address an increase in meth use among teenagers.

While several officials did not want to comment on the awareness campaign, at least one sheriff said it is doing its job.

“Some will suggest it was a bad idea, some will say it’s sheer brilliance,” said Pennington County Sheriff Kevin Thom. “In 24 hours, that campaign has raised awareness of meth more than we’ve been able to do in the last several years.”