‘This is my sacrifice’: Thousands maimed in Iraq protests 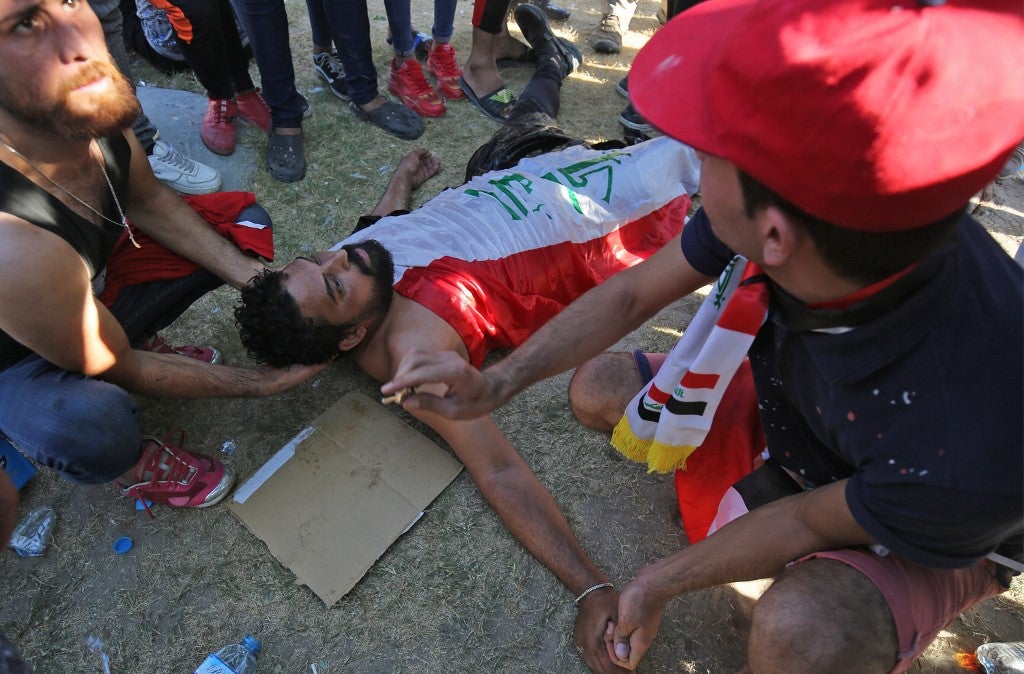 In this file photo taken on October 04, 2019, Iraqi men try to help a wounded protester during a demonstration against state corruption, failing public services, and unemployment, in the Iraqi capital Baghdad’s central Khellani Square. – At least 3,000 people who have been maimed in Baghdad and southern Iraq since anti-government protests erupted on October 1, according to the NGO Iraqi Alliance for Disabilities Organisation (IADO). (Photo by AHMAD AL-RUBAYE / AFP)

BAGHDAD, Iraq — A fractured spine, paralysed leg, hole in the back: Hamza took to the streets of Iraq’s capital to demand a better life but now he has even less than ever.

“This is my sacrifice for Iraq,” said the 16-year-old, his strained voice barely audible over the phone in Baghdad.

“If I could walk, I would be back in the protests now.”

Hamza is one of at least 3,000 people who have been maimed in Baghdad and southern Iraq since anti-government protests erupted on October 1, according to the NGO Iraqi Alliance for Disabilities Organisation (IADO).

The staggering number is the latest burden for a country already struggling with one of the highest disability rates in the world, according to the United Nations.

After decades of back-to-back conflicts, Iraq is in the thick of its largest and deadliest grassroots protest movement, with more than 300 people dead and 15,000 wounded.

To disperse protesters, security forces have used tear gas, rubber bullets, flash bangs, live rounds and even machine-gun fire — all of which can seriously maim or even kill, as Hamza learned.

On November 4, the teenager was among around 20 protesters wounded by live fire in Baghdad.

A bullet pierced Hamza’s stomach and exited through his back, leaving a gaping hole.

Two others hit his legs.

By the time he arrived at a nearby hospital, he had lost litres of blood and his heart was failing, said his father, Abu Layth.

Doctors revived the boy with a defibrillator, injected him with four units of blood and rushed him into surgery.

“He was basically dead. The doctors brought him back to life,” he said.

CT scans and medical reports shared by Hamza’s family revealed multiple fractures to his lower spine, leading to paralysis in his right leg.

After more than a week in hospital, the teenager has gone back home and is on steady doses of anaesthetics.

“Sometimes he screams from pain at night,” his father said.

Iraq has a long history of bloody conflict, from the 1980-1988 war with its neighbour Iran to the 2003 US-led invasion that toppled dictator Saddam Hussein and fight against the Islamic State group.

Each war has killed tens of thousands and left even more Iraqis impaired for life.

The government’s Central Statistical Organisation says that in the wake of decades of conflict, more than two million of Iraq’s 40-million population are disabled people entitled to state support.

But IADO and other rights groups say the real number sits at more than three million — and counting.

“The number of disabled people continues to grow… We exit one crisis and enter another,” said IADO head Muwafaq al-Khafaji.

He told AFP his group’s estimate of 3,000 maimed since October 1 is an approximation, as the government is either not documenting or not releasing precise figures.

To fill the gap, IADO members have been contacting hospitals and reaching out to families in Baghdad and southern cities.

Although Iraq is party to the UN Convention on the Rights of Persons with Disabilities, disabled people suffer from poor health services, lack of job opportunities and social exclusion.

They have organised their own rallies in Baghdad as part of the larger protest movement, demanding more support from the government.

“Infrastructure in Iraq is not even equipped to meet the needs of the non-disabled,” said Khafaji. “We need more than just ink on paper.”

Iraq suffers from an extremely dilapidated health care system, with hospitals severely under-equipped and doctors threatened on the basis of political or tribal disputes.

In the protests, rights groups have documented the abduction of volunteer medics as well as arrests of protesters from medical facilities.

The additional strain on both patients and doctors means wounded demonstrators do not get quality care quickly enough, leading to severe wound infections.

Medics have even had to sever limbs to save protesters’ lives, said Farah, a 19-year-old medical student volunteering in Baghdad’s main protest camp of Tahrir (Liberation) Square.

Tahrir is full of makeshift clinics treating protesters, including 30-year-old Ali, who wears a bandage where his right eye should be.

On the night of October 24, the father of four was on a nearby bridge when he heard shots ring out and saw hundreds of protesters scrambling away in panic.

Before he could do the same, a flash bang exploded at his feet and he collapsed, regaining consciousness an hour later in a nearby hospital.

But Ali could only open his left eye, as his other had been lost to a piece of shrapnel.

“They want to deter protesters, but we’re becoming even more determined,” he said, as crowds of bandaged men walked around him.

“The Iraqi people have endured everything. We were born to die.”