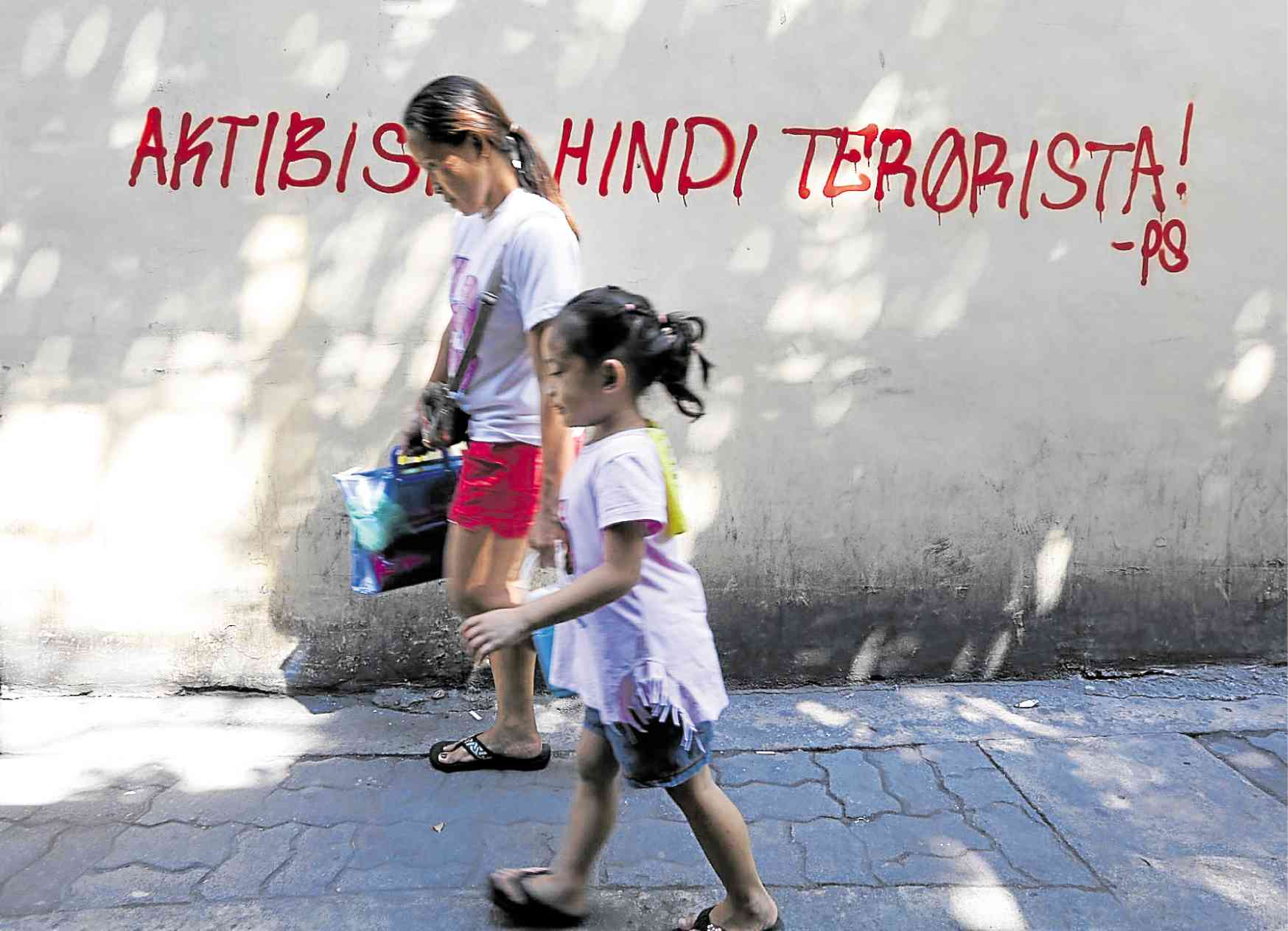 Students of Araullo High School on Tuesday painted over the words “Aktibista, hindi terorista—PS (Activist, not terrorist—PS)” which had been spray-painted on one of the school’s walls on UN Avenue in Manila last week.

The message was penned by members of cultural youth group Panday Sining (PS) as part of what they called a “Graffiesta.”

The group said the protest art was aimed at exposing the fascists attacks of the “US-Duterte regime.” Netizens’ reactions were mixed as some called it art while others dismissed it as vandalism.

A teacher from Araullo High School expressed dismay over the graffiti, saying they had been trying to promote a beautiful environment.

“It’s sad because it seems the youth behind the messages were probably not taught how to appreciate beautiful surroundings,” Rosanna Nilo said.

Panday Sining earlier apologized on social media for the inconvenience caused by its messages but stressed that these were a response to the “worsening economic and political state of the nation.”

“The purpose of our protest art isn’t to spite the citizens of Manila but to sound the alarm of the public against these injustices.” it said.

In Pasay City, residents have been warned about violating an antivandalism ordinance.

“Pasay is a travel city. Volumes of people come here either because our city serves as their jumping-off point to other places, or they visit attractions and other key centers here,” Mayor Emi Calixto-Rubiano said in a statement on Tuesday.

“We are thus exerting all efforts to make our city clean, beautiful and attractive to visitors. For this, we are keen on instilling discipline, not only among Pasayeños, but also among those who are visiting our city,” she added.

Rubiano was a councilor when she cosponsored City Ordinance No. 1496 that was approved on April 20, 1999.

The ordinance defines vandalism as any form of defacing through writing, drawing or painting, or splashing of paint on any structure privately or publicly owned, without the consent of the owner.

It is also vandalism to paste or post any campaign or advertising material on any structure, as well as to remove or deface any legitimate signs, billboards or public announcements.

Violators aged 18 and above may be jailed up to six months and fined P1,000, while minors also face a P1,000 fine on top of forced community service, which includes removing, cleaning and repainting the damaged structure.