Netizens could not help but join the discussion on the much talked-about Southeast Asian (SEA) Games’ cauldron, with an estimated cost of P55-million, designed by the late architect and National Artist Francisco “Bobby” Mañosa.

This comes after Senate Minority Leader Franklin Drilon criticized the “extravagant” cost of the the design and construction of the 50-meter tall metal structure on Monday, Nov. 18, during deliberations on the budget of the Philippine Sports Commission.

With that, the phrase “Kalderong Ginto” which brings to mind ABS-CBN’s drama series “Kadenang Ginto”, was picked up by netizens, making it one of Twitter’s trending topics on Tuesday, Nov. 19. 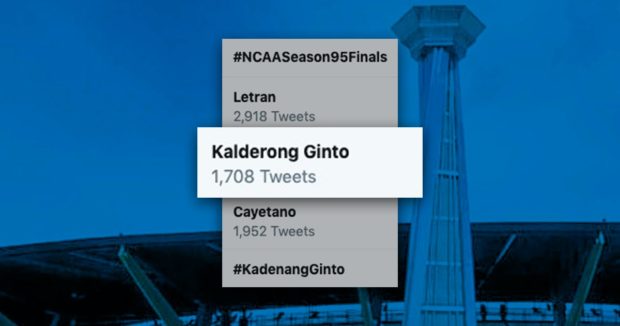 Twitter user @realskyexpress suggested that a more “fair and just” auditing should be done immediately by auditors coming from unnamed “Big 4” firms, rather than the Commission on Audit (COA).

“This 50M Kalderong Ginto should be audited immediately. And it’s better to get auditors from Big 4 firms than auditors from COA. I think they will be more fair and just.”

Another Twitter user, @beyhaviorist, pointed out that the government could not spend millions on fundamental needs of its people, but is willing to pay for costly yet unnecessary ones.

“[They] can produce Kalderong Ginto worth [P55-million] but [they] can’t provide shelter and help for the people who are affected in the recent tragedies like an earthquake, floods, storms, etc. How can this country improve when the government can’t even serve its own countrymen[?],” @OlandagKenny stated.

Can produce Kalderong Ginto worth of 55m but cant provide shelter and help for the people who are affected in the recent tragedies like earthquake,floods,storms etc,. How can this country improve when the government can’t even serve its own countrymen.

On a lighter note, other netizens gave snarky quips on the controversial cauldron.

“Buti kaldero lang. Paano pa kaya kung rice cooker, edi mas mahal? (At least it is just a cauldron. It could have been more expensive if it is a rice cooker),” @nielsedrick_ tweeted.

Some cybernauts even related it to the 2005 fantasy film “Harry Potter and the Goblet of Fire”, the fourth installment in the adaptation of the novel series by author J.K. Rowling.

“[This] 50 million kalderong ginto is a bad case of [a] capitalist goblet of fire. [Who’s] going to win this misplaced priority Triwizard tournament?” asked @koenigology.

this 50 million kalderong ginto is a bad case of capitalist goblet of fire. who's going to win this misplaced priority triwizard tournament?

“Is this the same Kalderong Ginto they used in the [Harry Potter] and the goblet of fire movie? Mahal eh, susunugin lang naman (It is too expensive. It will just be burned down.),” @jadedee0918 added.

Is this the same Kalderong Ginto they used in the HP and goblet of fire movie? Mahal eh, susunugin lang naman.

Of course, there is no getting away from the story of deception and desire in ABS-CBN’s noontime drama series “Kadenang Ginto” starring Dimples Romana as Daniela Mondragon, and Beauty Gonzales as Romina Mondragon. Netizens were quick to see the connection and exclaimed, “The Mondragons are shaking!”

The country will be hosting the 30th Southeast Asian Games, to be staged in facilities built in New Clark City, Pampanga, and other designated venues from Nov. 30 to Dec. 11. JB