Highest tide in 50 years leaves flooded Venice ‘on its knees’ 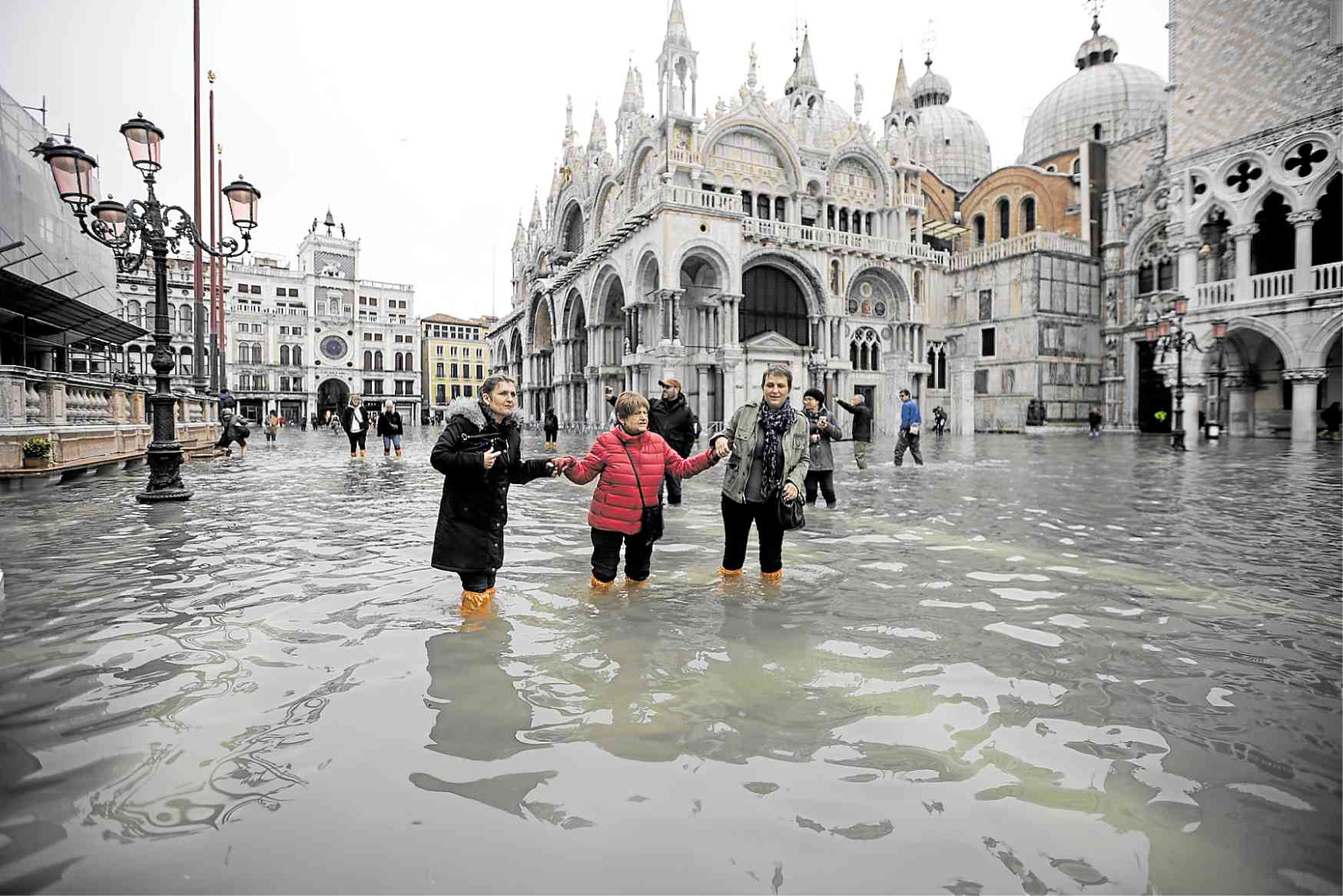 HIGHEST TIDE IN DECADES The Italian government is expected to declare a state of emergency on Thursday, with much of
Venice left under water after the highest tide in 50 years ripped through the historic city.—AP

VENICE—Much of Venice was left under water after the highest tide in 50 years ripped through the historic Italian city, beaching gondolas, trashing hotels and sending tourists fleeing through rapidly rising waters.

The government in Rome was expected to declare a state of emergency at a Cabinet meeting on Thursday after Prime Minister Giuseppe Conte described the flooding as “a blow to the heart of our country.”

Officials blamed climate change while shopkeepers on the Grand Canal raged against those who have failed to protect the Unesco city from the high tide.

They said corruption had repeatedly delayed a barrier protection system that could have prevented the disaster.

“The city is on its knees,” Venice Mayor Luigi Brugnaro said in an interview with national broadcaster RAI.

“There’s widespread devastation,” he said in the famed St. Mark’s Square, which bore the brunt of the flooding. “In all likelihood, the damage from last night runs into hundreds of millions of euros.”

The state of emergency for a natural disaster will allow the government to use “exceptional powers and means” to intervene more quickly, and Conte said his government was ready to allocate funds.

“The disaster that has struck Venice is a blow to the heart of our country,” Conte said at the scene. “It hurts to see the city so damaged, its artistic heritage threatened.”

St Mark’s Square was calm on Wednesday evening, with just a smattering of tourists walking through the relatively dry square marked with occasional puddles.

Four Venetian friends who had gathered in the square, all wearing boots, said the relative quiet and lack of tourists was upside of an otherwise harrowing few days.

Earlier, tourists lugging heavy suitcases waded in thigh-high boots or barefoot through the submerged alleys, as gondola and water taxi drivers baled sewage-tainted water out of their trashed vessels.

Dirty water was swirling around the marble tombs inside the 12th-century crypt of St. Mark’s Basilica, which suffered untold damage when an unprecedented high tide swept through the city.

It was closed to tourists as were many other Venice highlights including the Fenice Theatre and the Ducal Palace.

“We said last year that the basilica had aged 20 years in a high tide. It risks having aged much more than that in this one,” said the building’s procurator Carlo Alberto Tesserin.

A 78-year-old was killed by an electric shock as the waters poured into his home.

“We ask the government to help us, the costs will be high,” Mayor Brugnaro tweeted. “These are the effects of climate change.”

“The future of Venice is at stake,” he warned. “We cannot live like this anymore.”

“This is what is happening more and more often in the Mediterranean,” Costa said on Facebook. “Global warming will destroy our planet if we do not immediately reverse the direction.”

The exceptionally intense “acqua alta,” or high waters, peaked at 1.87 meters. Only once since records began in 1923 has the water crept even higher, reaching 1.94 meters in 1966.

“It was unbelievable. The water rose so quickly,” said resident Tiziano Collarin, 59, as he surveyed the damage.

“Windows were blown out, there are those who have lost everything,” he said as the flood alarm rang out to warn those in the canal city that the tide, which had receded somewhat overnight, was rising once again.

The fire brigade said it had carried out over 400 operations, as well as laying on extra boats as water ambulances.

Around 160 firefighters were deployed to rescue people stranded on jetties and to recover boats broken free from their moorings.

President of the Veneto region Luca Zaia said 80 percent of the city had been submerged, causing “unimaginable damage” to the city, which has 50,000 residents but receives 36 million visitors each year.

A massive infrastructure project called MOSE has been under way since 2003 to protect the city, but it has been plagued by cost overruns, corruption scandals and delays.

The plan involves 78 gates that can be raised to protect Venice’s lagoon during high tides—but a recent attempt to test part of the barrier caused worrying vibrations and engineers discovered parts had rusted.

Outside historic Venice, the Lido and Pellestrina islands were also hard hit by flooding.