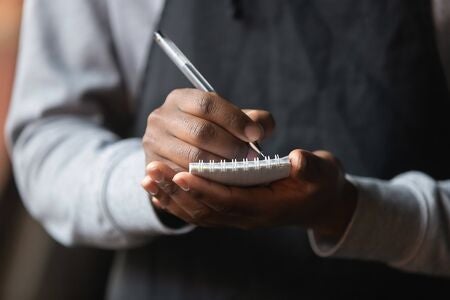 A black food server at a restaurant in Phoenix, Arizona, United States was given an order slip with the n-word written on it as a “joke.”

The employee, 21-year-old Rakevion White, took to Instagram yesterday, Nov. 13, to show the food order with the racial slur he received on Oct. 22 from two coworkers at the Breakfast Club restaurant.

“Apparently this was a hysterical joke about myself that everyone including management thought was ok because the two employees were ‘Only joking,'” he said. “Now I’ve been called way worse in my life but if you know me, one thing I don’t do is tolerate disrespect. But my employer allowed me to (be) disrespected and humiliated by my coworkers.”

Four weeks later, there has still been no disciplinary action taken against the two employees responsible, according to White.

After taking the issue up to management, White said his hours have been cut down from 25 hours a week to 14 to 18 hours a week. He was also reassigned to be a server assistant rather than wait tables, which denies him the chance to acquire tips, as per Buzzfeed News.

“Furthermore, since this has taken place not only myself but other black employees hours have been reduced and they have not let us serve as waiters. For future references please be mindful of the companies that you support,” White said.

Breakfast Club has finally released a statement condemning the employees’ actions earlier today, Nov. 14, as seen on an Instagram post.

While the restaurant condemns the racist “joke,” they said they will not fire the employees responsible and will rather give them a second chance, “but there will not be a third.”

Contrary to White’s post, however, Breakfast Club claims in the statement that they took “immediate action to discipline the employee involved.”

“[Just] as importantly, to make sure that the employee who raised concerns about this horrible scenario was okay,” it added.

Before the statement was released, however, Breakfast Club’s social media pages appeared to have been taken down after White divulged the incident to the public, as per report. Ian Biong/JB