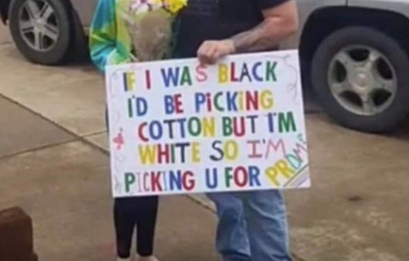 A student from Ohio, USA, has been banned from attending prom following a promposal considered racist by school officials.

The unidentified student posted a photo on social media of the promposal, which read, “If I was black I’d be picking cotton but I’m white so I’m picking u [sic] for prom,” as per FOX8 on May 1. It is unclear whether the student is on his junior or senior year, but his intended prom date is not from the school district.

“To be frank with you I thought, ‘Oh my goodness; this is awful,’” Janice Wyckoff, superintendent at Clear Fork Valley Local Schools, said, according to the report. “Kids need to understand, when you’re celebrating things it doesn’t give you a pass on using inappropriate racial slurs.”

The school district, comprising around 1,700 students, was disappointed by the incident, the report said. The student, meanwhile, is remorseful and has since deleted the photo and apologized for it.

“This is a process, growing up is a process. This is one of those moments that’s a teachable moment for this kid that will last a lifetime,” Wyckoff said. “I don’t believe that this is any group think on the part of the student body. This is one person making a bad decision that’s going to reflect on everybody.”

It was not mentioned whether the student would receive any further disciplinary action.  Cody Cepeda /ra