Bayan, Karapatan in Iloilo open offices for inspection by CHR 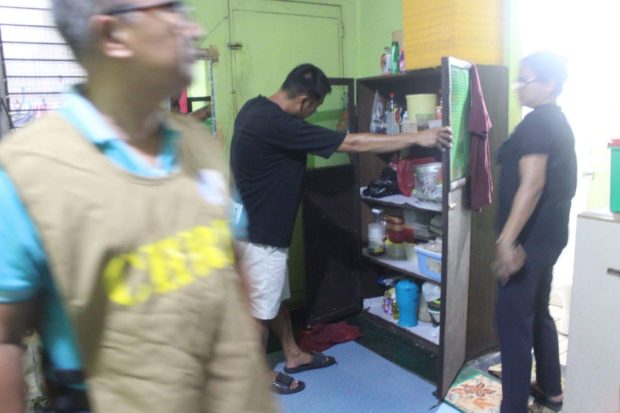 Village officials and personnel of the Commission on Human Rights in Western Visayas inspect the offices of Bayan and Karapatan in Iloilo City on Wednesday. CONTRIBUTED

ILOILO CITY –– Anticipating possible police raids, progressive organizations in Iloilo invited reporters, village officials, and personnel of the Commission on Human Rights to inspect their offices to show they were not hiding firearms and explosives.

Officials of Bagong Alyansang Makabayan (Bayan)-Panay and human rights group Panay Alliance Karapatan opened boxes and cabinets and allowed those invited to see the rooms and other spaces of their office in Jaro District.

“We are showing even our trash cans just to prove that we are not hiding any firearms, grenades or other explosives. If there is a police raid and they found such things, then these will surely be planted,” Elmer Forro, Bayan-Panay secretary-general, told the INQUIRER.

Forro said their office is known to the community and is not an underground safe house of rebels.

He said they initiated the “open house” activities after the offices of progressive organizations were raided by police and military personnel in Manila and the cities of Bacolod and Escalante in Negros Occidental.

In Bacolod City, 55 persons, including the spokesperson and leaders of the Kilusang Mayo Uno and National Federation of Sugar Workers were arrested after police allegedly found firearms and explosives in their offices.

These were denied by those arrested who accused the police of “planting” the purported evidence.

All except 11 of those detained were released because of a lack of probable cause. Several of them were minors whom the progressive organizations said were members of a theater group.

Read Next
Special power for Duterte ‘won’t attain its objective anymore’ — Cayetano
EDITORS' PICK
51% of Filipinos think it’s dangerous to publish anything critical about Duterte admin — SWS
PhilHealth mess: Whose heads will roll? Roque says he can’t wait to name names
COVID-19 cases in PH overshoot 122,000 mark
Water remains our saving grace right now
Smart 5G goes live
The biggest lottery jackpot in the world is $158 million, and even someone from the Philippines could win it
MOST READ
‘Vexed’: Guanzon raps Topacio over Alzheimer’s remark
Captain astonished that his ship delivered Beirut explosive
COVID-19 cases in PH overshoot 122,000 mark
Locsin to China: Don’t overinterpret
Don't miss out on the latest news and information.