A white woman was body-slammed after she allegedly threw a racial slur at employees of a fast-food chain in Columbia, Tennessee, USA, on Nov. 5.

The 55-year-old woman (name withheld in the report) got into an argument with workers at a Popeyes branch over a supposed refund, as per The Tennessean last Saturday, Nov. 9. 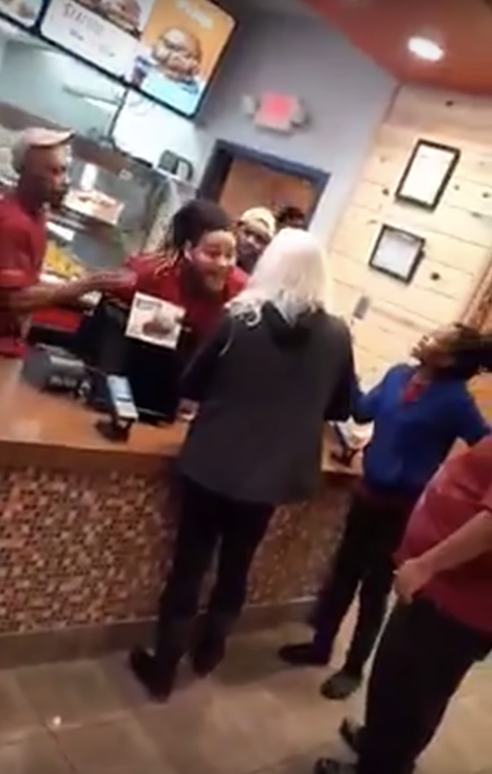 The unnidentified woman in an argument with the fast-food restaurant worker before the body slam. Image: screengrab from Sachethana Pathirage’s video “Popeye’s Body Slam – Full Video (in store and out)” via YouTube/Sachethana Pathirage

She claimed she was owed a refund after reportedly being charged twice for a previous purchase on Nov. 3.

“When she got there she was treated with hostility and anger from the manager,” the woman’s lawyer Rocky McElhaney told the news outlet. “There were words back and forth.”

“You are in the wrong place saying the n-word,” an employee said in a footage of the heated exchange, as per report. A certain Sachethana Pathirage posted the video on YouTube last Friday, Nov. 8. The clip did not show the woman using any racial slur and McElhaney denied that his client used any racist remark.

The lawyer also noted that the woman was called “an ugly broke-down cracker.” However, the remark was not captured on video.

After the argument, the woman was seen leaving the restaurant. An employee then followed her, with other workers behind him. The 29-year-old Deriance Ra’Shaiel Hughes grabbed her waist from behind before lifting her up and slamming her body onto the ground.

The woman began screaming repeatedly as Hughes stood over her, as per report. McElhaney noted that “nobody helped her. Nobody. Finally someone called an ambulance.”

The woman was later hospitalized at the Vanderbilt University Medical Center with nine fractures in her elbow, six broken ribs and a broken left leg. Her lawyer also stated that she has since undergone two procedures and will require “months of rehabilitation.”

Speaking about the assault and the argument before it, McElhaney said: ”If she said something she should not have said in retaliation and the heat of the moment we do not condone that and she regrets that, but it does not give someone the right to break somebody’s body almost in half.”

“She’s a mixture of sad and angry right now,” he was quoted as saying. “Nobody deserves to be treated like that.”

Hughes was arrested last Friday and charged with felony aggravated assault, police said in a statement. Others may also be charged regarding the incident.  Ryan Arcadio /ra

WATCH: Hotel worker stands up to woman’s racist remark, denies her a room