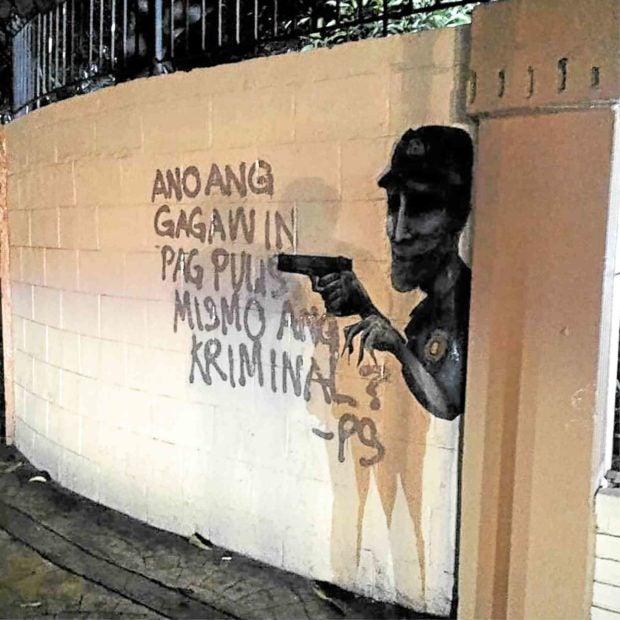 LIKE OR DISLIKE? A photo of this “protest art” has been shared over 2,000 times on social media, generating mixed reactions. —PHOTO FROM PANDAY SINING’S FACEBOOK PAGE

MANILA, Philippines — What authorities have described as vandalism has been defended by a group of young artists as part of an ongoing “Graffiesta.”

On Tuesday, city hall personnel painted over political messages that had been scrawled on the Lagusnilad underpass and a wall on UN Avenue.

“Presyo ibaba, sahod itaas—PS. (Lower prices, raise wages—PS)” read one of the messages left on the underpass that had just been repainted earlier this month.

On a wall on UN Avenue, a poster showed a policeman holding a gun next to these words: “Anong gagawin pag pulis mismo ang kriminal?—PS (What do you do when the police themselves are the criminals?—PS).”

“Vandalism is not the answer to change. Discipline and understanding are what we need for a developed Manila,” the Manila Tourism and Cultural Affairs Bureau said in a tweet.

PS or Panday Sining, a cultural organization of young artists, said the protest art was “about exposing and at the same time opposing the fascist attacks of the US-Duterte regime.”

This was their “contribution” in addressing the crises in the country, PS representative Francis Joven told the Inquirer.