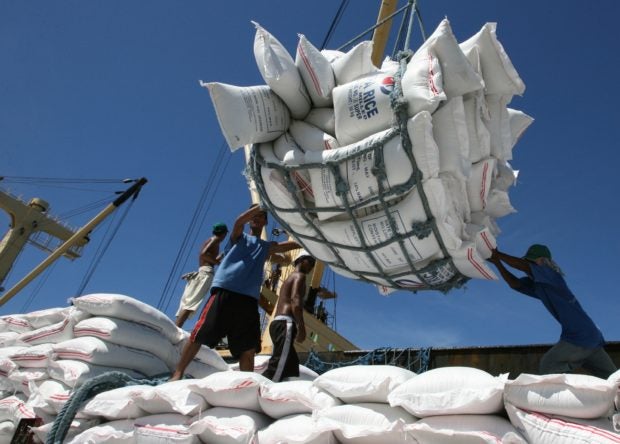 This photo, taken on July 05, 2007, show workers unloading sacks of rice from the Vietnam cargo ship in the port of Tabaco, Albay. The National Food Authority (NFA) was then importing 10,800 metric tons of rice from Vietnam due to a supply shortage. (File photo by Edwin Bacasmas / Philippine Daily Inquirer)

MANILA, Philippines — Malacañang is “concerned” that the Philippines has become the world’s biggest importer of rice this 2019.

But presidential spokesperson Salvador Panelo said the government was on top of the situation.

“We are concerned precisely that’s why [Agriculture] Secretary [William] Dar is there,” Panelo said in a Palace briefing. “Dar is doing his own ways to solve whatever problems confronting the farmers.”

Dar is a former director-general of the International Crops Research Institute for the Semi-Arid Tropics (ICRISAT) and was acting agriculture secretary during the administration of President Joseph Ejercito Estrada.

“Secretary Dar has been appointed there precisely because he used to head that department and he was successful during his stint. So, he would be knowledgeable on how to curb whatever problems that are existing today,” Panelo said.

The country’s rice imports have been projected to reach a record 3 million metric tons (MT) by year-end, according to a report by the United States Department of Agriculture-Foreign Agricultural Services (USDA-FAS)

“Secretary Dar has been placed there precisely to undertake measures, to solve the problems hounding the industry,” Panelo said.

He said the government recognized that the county had as rice sufficiency problems but said Dar was “on top of that.”

“I’m sure Secretary Dar knows the problem and he will introduce measures to solve the same,” he said. “We expect Secretary Dar to implement measures that will make our rice produce increase.”