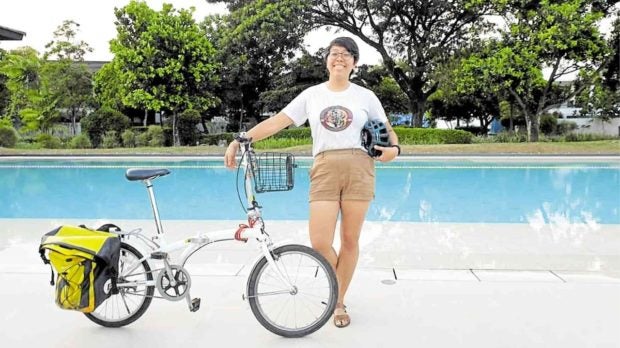 BIKE FOR LIFE Keisha Mayuga, a 26-year-old licensed environmental planner who studies transport and urban planning, has made the shift to biking as an alternative greener lifestyle.
The farthest she has biked was 33 kilometers from Quezon City to Bacoor in Cavite province. —KEISHA MAYUGA / CONTRIBUTOR

MANILA, Philippines — There are 33 kilometers of uneven, difficult roads between Quezon City’s White Plains and Bacoor, Cavite. But during rush hours, Keisha Mayuga can cover that distance on a bike in around two and a half hours — nearly as much time as it would have taken her in a car or in a bus but without wasting fuel and adding to pollution.

It’s like cheating her way through the congestion that’s crushing everyone else’s souls, she jokes. The licensed environmental planner sees biking more than just a sport. It is an alternative to overcome the severe traffic choking the Metro.

“I realized that it was so inhumane to spend two hours just getting home when it can be covered under less time,” she said. “So one day I started writing plans. My goal in life is to bring people home in under 30 minutes. And among those steps was to shift to biking.”

She started biking two years ago but it was only late this year that she began actually documenting her cycling trips for research. She is studying urban planning, specializing in transportation, at the University of the Philippines (UP).

Every day, she would calculate the distance, expense and approximate travel time if she were to go by car, bus or a bike.

More often nowadays, she’s found that Google Maps shows that it’s faster to bike than to travel via public transport or by car. So she would bike through Manila’s tough streets, struggling for road space with hot-headed drivers, avoiding potholes and cracks on sidewalks.

Her biking adventures are often documented on her Instagram account, where her followers ask her about her experience and whether they, too, should shift to biking.

In total, she has biked over a thousand kilometers, saving herself an average of P200-300 per trip (an amount she would have paid for a Grab ride to the same destination). She has also lost several pounds and has grown darker, she noted.

“But outside of myself, [another advantage] was thinking about the impact you make in terms of transport choices. Imagine how much carbon dioxide you are making if you are riding a car! It’s possible to choose biking and to create a greener culture. We just need to tell people that it’s possible,” she said.

But Mayuga, who also belongs to the commuter advocacy group Altmobility, is not blind to the perils of biking in Metro Manila. Her daily experience has sharpened the focus on why people refuse to bike: lack of proper bike lanes, aggressive car drivers, ill-maintained roads that could cause even the most experienced biker to crash.

Mayuga has always advocated biking. She was among the founders of UP Bike Share, the first and so far the only bike-sharing program at UP Diliman, which now operates around 40 bicycles.

When she started her master’s program, she began a serious study of the “determinants of mode choice,” or how people choose their mode of transport.

While the government has repeatedly pushed for greener transport, several government plans and studies, including the Japanese-funded Metro Manila Urban Transport Improvement Study in the 1990s, actually focus more on cars and motorized transport, and very few on cycling and walking, she said.

“At the time, or even now, cyclists are considered invisible and cycling is not seen as a means to commute. It’s more a recreational sport,” she said.

She notes that it isn’t the lack of infrastructure that discourages people from biking. Her research has found that the biggest barrier was often the weather in this tropical and humid country where temperatures can soar to 40 degrees.

“There are other reasons, like they have a lot of things to carry, they’re not fit enough, they don’t know how to bike, but most of the time it’s because they don’t want to be sweaty and there’s no shower,” she said.

The amplifying effects of climate change are expected to worsen the heat—and that’s all the more reason to start biking and reducing emissions, she said.

Mayuga said she could afford to be indifferent to her choices, being a car owner herself. But choosing to bike everyday means subjecting herself to sweltering heat and allotting extra time in between trips for a quick shower.

But “we really have to popularize biking because it’s becoming more and more impossible to bring a car here,” Mayuga said, referring also to the severe congestion in the metropolis.

“We’re among the top countries most vulnerable to the effects of climate change and sadly, 80 percent of our emissions come from transport. So everyday, I decide if I’m going to be a car by myself or will I just be one less car on the road.”

“It’s become beyond me and my comfort,” she added. “It has to be a conscious decision to be one less car on the road.”

Over the past two years, biking long distances has become easier for her. From biking 11 km from her home in Pasig to her office in Quezon City, she began stretching her routes from the relative familiarity of Edsa to the scarier East-West Service Roads in the South Luzon Expressway.

Transport officials have often made efforts to promote biking. The Metropolitan Manila Development Authority, for one, has tried putting bike lanes along Edsa, but its noncontiguous nature and poor maintenance has made it ineffective.

So far, only Pasig City has a robust system in place for bicycles, having created pathways and protected bike lanes in the central business district.