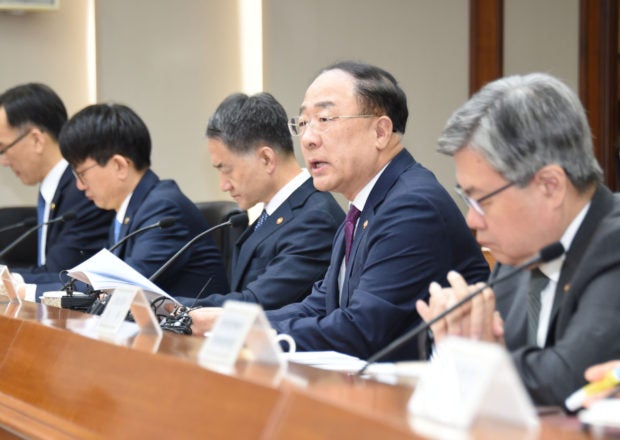 Deputy Prime Minister and Finance Minister Hong Nam-ki chairs a ministerial meeting on economic revitalization on Wednesday. (Ministry of Economy and Finance) via The Korea Herald

SEOUL — South Korea will reduce its troops by nearly 80,000 by 2022 and expand the use of technologies, responding to an aging society, according to the country’s fiscal chief on Wednesday.

“We will reorganize the structure of our military forces, focusing on cutting-edge technologies,” said Deputy Prime Minister and Finance Minister Hong Nam-ki in a ministerial meeting on economic revitalization, held at Export-Import Bank of Korea headquarters in Yeouido.

The restructuring plan aims at reducing the country’s military establishment to 500,000 from the current 579,000 over the upcoming years. The corresponding figure as of last year was 599,000, the 2018 defense white paper showed in January.

To make up for the capacity shortage, the government will expand the use of weaponized drones, reconnaissance satellites and unmanned aircraft, according to the minister.

While phasing out converted military services such as conscripted police and maritime police, the government will take a more flexible approach to alternative services in military-designated companies.

“The (pace and scale of) reduction for alternative (military) services will be decided in consideration of economic situations, such as the government subsidy for small and medium-sized enterprises,” Hong said.

Also, embracing the active social participation of women and an increased number of naturalized foreigners, the government vowed to heighten the ratio of female military officers and possibly to mandate military service for naturalized nationals. The number of foreigners acquiring Korean nationality stood at 10,086 as of 2017, data showed.

The military downsizing came in line with the country’s demographic changes.

Statistics Korea forecast that the population here will contract to 39 million in 2067, dropping sharply from the estimated 51.7 million this year.

The country’s birthrate hit a record low of 0.98 births in a woman’s lifetime, visibly lower than the 2.1 that is required to maintain the current population stable. The corresponding average of the Organization for Economic Cooperation and Development is 1.65.

Also, facing the decreasing number of school-aged children, the government said it will start discussions with related ministries next year to revise the number of teachers. The number of young people aged 6-17 is expected to drop to 4.02 million in 2040 from 5.82 million in 2017, according to the statistics agency.