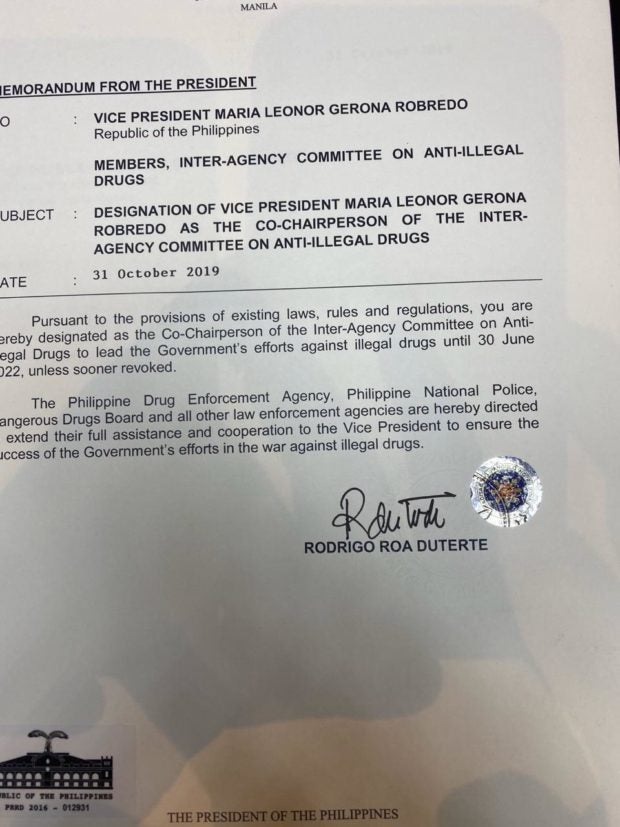 Under the EO, the Philippine Drug Enforcement Agency heads the committee with 20 government agencies as members.

Robredo’s appointment came days after the President offered the Vice President to be his drug czar and give her “full powers” to run the government’s war on drugs for six months.

READ: Duterte to ‘surrender’ power to Robredo to enforce law for six months

Despite being a co-chair, presidential spokesperson Salvador Panelo said Robredo ’s post would be considered a Cabinet rank.

“Members of the political opposition have been issuing demands relative to the President’s offer to the Vice President to head the government’s campaign against illegal drugs, alleging that the same is a ruse manufactured by this Administration to discredit the latter,” Panelo said in a statement.

These people, he said, “have demanded that VP Leni be given the post with drug enforcement agencies and offices, such as the Philippine Drug Enforcement Agency, the Philippine National Police and the Dangerous Drugs Board, under her authority, and the President has directed these instrumentalities to render full assistance and cooperation to her through this official document.”

He added that “they have demanded that she be authorized to become the drug czar until the end of PRRD’s term, and the same paper designates her with the highest position possible to battle the proliferation of dangerous drugs until June 30, 2022.”

“Finally, they have demanded that the power be granted through an official correspondence, and not just through a verbal or electronic communication, and the President has acceded to such demand,” he said.

“With this development,” Panelo said “the Palace supposes that detractors and critics will finally see the sincerity of the President in making such offer to the Vice President and understand that the Chief Executive’s ultimate motivation in making the same is the welfare of the Filipino people, with the hope that the government be successful in combatting the atrocity caused by the use and trade of illegal narcotics, regardless of who greatly contributed to such success.” /jpv