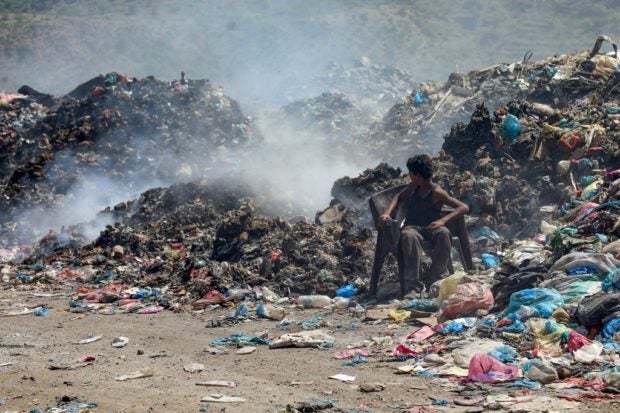 A Yemeni youth looks behind him as he sits on a chair at a garbage dump in the third-largest city Taez in southwestern Yemen, on October 26, 2019. Mounds of stinking garbage line the streets of Yemen’s historic city of Taez, once renowned as one of the most beautiful places in the country, but now torn apart by war. The city in the highlands of southwestern Yemen has become a breeding ground for mosquitos as well as deadly outbreaks of diseases like cholera, as decaying refuse leaches into waterways. (Photo by AHMAD AL-BASHA / AFP)

Taez, Yemen — Mounds of stinking garbage line the streets of Yemen’s historic city of Taez, once renowned as one of the most beautiful places in the country, but now torn apart by war.

The city in the highlands of southwestern Yemen has become a breeding ground for mosquitos as well as deadly outbreaks of diseases like cholera, as decaying refuse leaches into waterways.

Yemen, long the poorest country in the Arabian Peninsula, has been mired in conflict since the Iran-aligned Huthi rebels swept into the capital Sanaa in a 2014 offensive, sparking a military intervention by a Saudi-led coalition.

While Taez is controlled by pro-government forces, it is under siege from the Huthis who control the mountains that surround the city, from where they have launched repeated bombardments.

While all of Yemen has suffered from the war, Taez is particularly hard-hit. Barely any schools are able to function, freshwater is scarce, and it is difficult to bring in supplies including essentials like food.

Trapped within the city limits, Taez’s more than 600,000 people are suffering as garbage mounts up, choking roads and canals.

Mounds of brightly colored plastic, old tires, boxes, and shredded plastic lie in smoldering piles or heaped in dumpsters – a far cry from the days as far back as medieval times when Taez was lauded for its beauty and scale.

Cholera, which can kill within hours if left untreated, reappeared in Yemen in April after an initial outbreak in October 2016.

The World Health Organization said 304 people died of the disease between April 2017 and August 2019 in Taez, with cases fluctuating from week to week.

Staff at the shabby and ill-equipped hospitals that are still functional amid the continued violence are at their wits’ end, unable to cope with the rising number of patients.

“I was sleeping when all of a sudden I woke up to severe stomach pain and diarrhea, and my children rushed me here,” said Arwa Hmeid as she lay on a bed at the city’s general hospital.

“The hospital is full of cholera patients and three women have already died since I’ve been here,” she also said.

Cholera, which causes potentially deadly diarrhea, is contracted by ingesting food or water contaminated with a bacterium carried in human feces and spread through poor sanitation and dirty drinking water.

Mohammed Mkharesh, deputy director of the general hospital, said the accumulation of garbage on the streets of Taez and other nearby cities has had a direct impact on people’s health.

“This is paving the way for cholera, dengue, and malaria,” he told AFP, adding that hospitals are “under pressure with the increase of cases and lack of resources”.

The Yemen conflict, which the United Nations has described as the world’s worst humanitarian situation, has displaced millions and left 24.1 million people – more than two-thirds of the population – in need of aid.

Mohammed Jassar, the beleaguered head of Taez’s department of sanitation, said civil servants are doing their best to clean the city.

“The department is now working two shifts, one in the morning, and one in the evening… but the garbage keeps piling up and the department lack tools and resources,” he said despondently.

“You also see people who just throw garbage on the street even if it is right in front of their home, and then they complain about the mounds of garbage accumulating?” he added.

He urged the international community to come to the aid of the Yemeni people, saying that only “if the city is cleaned will the spread of illnesses decrease.” /kga