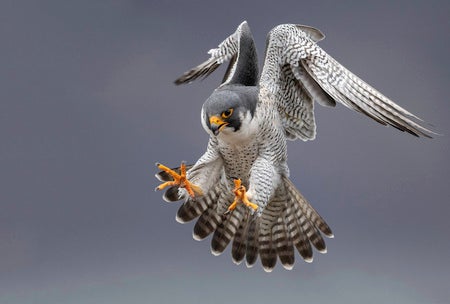 An unnamed airport worker may lose sight in one eye after suffering an attack from a Peregrine falcon, which severely injured his face, neck and eyes.

The attack occurred inside an airport hangar of Australian airline Qantas in Sydney on Oct.22, as per The Guardian.

The Peregrine falcons have reportedly been living inside the hangar for at least 20 years, which is “a known roosting site” according to Australian wildlife rescue group Wires.

The Transport Workers Union has deemed the hangar an “unsafe work environment” since the attack, and said the victim “may lose sight in one eye.”

Qantas has let the birds of prey maintain their home over the years as they have proven to be effective guards against mice, rats and pigeons. As per report, they cannot be so easily removed as the Peregrines are a protected species.

TWU spokesperson Richard Olsen said the union does not want to get rid of the birds, but that Qantas should keep workers safe by moving them away from the Peregrine-inhabited areas.

“We are not calling for the birds to be removed, rather that Qantas have aircraft cleaned before the aircraft are moved to the particular hangar where these birds of prey roost and hunt,” he was quoted as saying.

Olsen also said that the airline never warned them, saying “TWU members are not aware of any communication from Qantas about the possible unsafe work environment that the presence of these birds create.”

In an internal safety warning The Guardian obtained from Qantas, the airline confirmed the attack and warned staff to wear safety goggles until the end of breeding season in November.

“Maintain clearance from any falcon activity,” the warning was quoted as stating. “If you are swooped or observe the falcon, please report the location and activity observed.”

Peregrine falcons are some of the most widespread bird species and are found all over the world, except Antarctica. They are also the fastest birds on the planet, capable of diving at an enormous speed of up to 240 miles per hour. Ian Biong/JB