In clearing of cemetery roads, vendors swept away, too 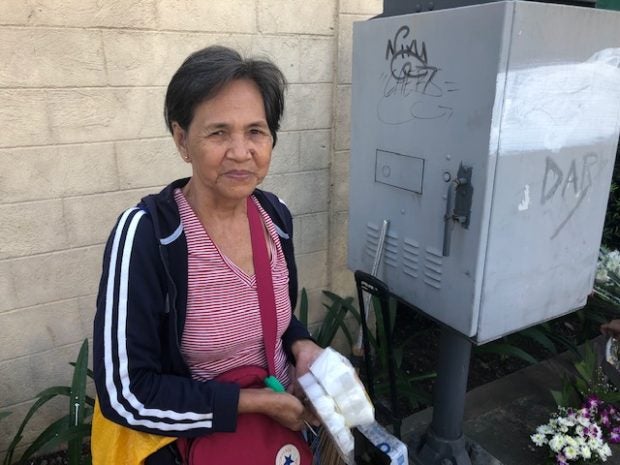 MANILA, Philippines — Clearing operations on roads near Manila South Cemetery swept away even those who used to earn more than the usual when millions flock to their loved ones’ graves during “Undas”—candle vendors.

One of them is Aling Liwayway, 63, who said she has been cashing in on increased sales of candles during All Saints and All Souls Day when the living commune with the dead.

Liwayway positions herself near the cemetery as early as 4 a.m. in anticipation of space for vending shrinking as cemetery goers and other vendors arrive.

But not at 4 a.m. of Oct. 31. She found the roads empty of vendors. No stalls, no tents. These have been banned, she learned.

“We just position ourselves here, hoping they give us space,” she told INQUIRER.net in Filipino.

“This is becoming more difficult,” she said. “In the past we were given space,” she added.

Liwayway said she used to earn P1,000 per day selling candles to cemetery goers. This time, without space or a stall, she expects her income to be much lower.

A stall, albeit temporary, would have made it easier for her to sell her merchandise unlike when she does it standing while clutching her candles.

Liwayway says she’s been a vendor for at least 10 years. It helps her make ends meet.

“My children were in high school yet when I started vending,” she said. “They’re now in college and we’re still here.”

“We no longer have vendors here, we already talked about it,” Mendez said.

Even the city government of Makati, he added, had adopted a no-vendor policy.

As far as the Manila city government’s policy is concerned, Mendez said there are orders that need to be enforced—clear sidewalks of vendors, clean toilets and cut grass.

And there’s not much Aling Liwayway can do about it. /TSB