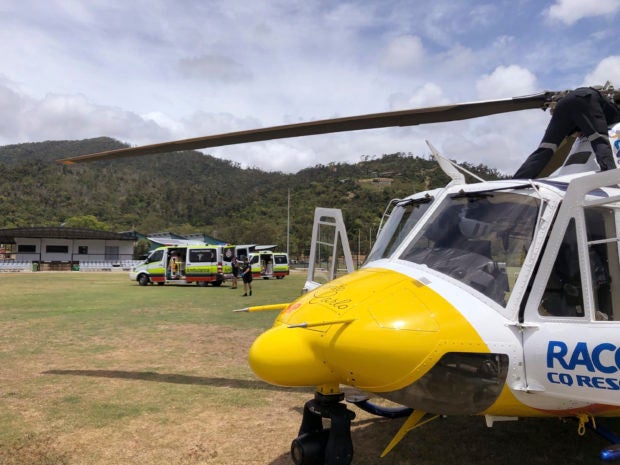 In this photo provided by RACQ CQ Rescue, a helicopter and ambulances used in the rescue of two tourists attacked by a shark are parked on a sporting ground, near Airlie Beach, Australia. A shark bit off a British tourist’s foot and mauled another British tourist’s leg as the men snorkeled on Australia’s Great Barrier Reef, officials said. (RACQ CQ Rescue via AP)

The men aged 22 and 28 had been on a snorkeling tour in the Whitsunday Islands when they were attacked, tour organizer ZigZag Whitsundays said.

They were brought 11 kilometers (7 miles) by boat to the mainland town of Airlie Beach where paramedics were waiting for them, Queensland state Ambulance Service spokeswoman Mel Mangan said. They were then flown by helicopter south to a hospital in the city of Mackay in serious but stable conditions, RACQ CQ Rescue said.

“An English tourist has had his foot bitten off and another has serious lacerations to his lower leg after a shark attack in the Whitsundays today,” the helicopter rescue service said in a statement.

The victims told the helicopter crew “they were wrestling and thrashing about in the water” in a passage between Hayman and Whitsunday Islands when they were attacked, the statement said.

The 28-year-old man lost his foot, the Mackay Base Hospital said in a statement.

A shark killed a man in November last year in a Whitsunday Island harbor where two tourists had been mauled a month earlier.

The 33-year-old victim had been diving from a paddleboard while on a yacht cruise.

The spate of attacks in the Whitsundays left authorities struggling to explain an apparent escalation in danger in the internationally renowned vacation destination. In September last year, two Australian tourists were mauled on consecutive days, one a 12-year-old girl who lost a leg. /kga