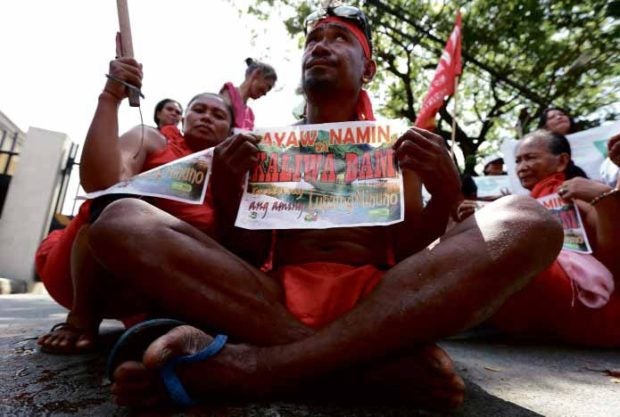 Members of the Dumagat-Remontado indigenous group hold a protest at the headquarters of the Metropolitan Waterworks and Sewerage System in Quezon City against the proposed KaliwaDam, which is expected to submerge their communities. (Photo by Niño Jesus Orbeta / Philippine Daily Inquirer)

MANILA, Philippines – The government should not solve a water shortage — in this case, building Kaliwa Dam to give Metro Manila a new water source — at the expense of indigenous people (IP) rights, the Commission on Human Rights (CHR) said.

“The Commission on Human Rights cautions the government to be mindful of its State obligation in implementing development projects such as the construction of Kaliwa Dam in areas covering ancestral domains of indigenous peoples in Rizal and Quezon provinces,” CHR said in a statement issued on Monday.

“While we recognize that there is a legitimate concern on water security in Metro Manila, this should not come at the expense of human rights of affected indigenous communities and their land’s biodiversity,” it added.

This warning from CHR came a week after the Department of Environment and Natural Resources (DENR) gave an environmental compliance certificate (ECC) to the Chinese loan-funded Kaliwa Dam — drawing criticisms from environmentalists and IP rights advocates.

“We call on the DENR to ensure that the project is respectful of environmental laws and human rights standards. Although it already granted the project of the ECC, the project proponents will be held liable if they fail to comply with the stated conditions in the ECC and will result in the cancellation of the certificate,” the CHR said.

Earlier, President Rodrigo Duterte said he would use extraordinary powers to start the construction of the P18.7 billion dam. He also said, though people in the area might have the right to protest the project, he would use these powers if it could be proven that measures were in place to safeguard the people’s rights.

READ: Duterte to use ‘extraordinary powers’ for start of Kaliwa Dam

However, CHR expressed concern over audit reports by the Commission on Audit (COA) showing that the Chinese construction firm bagged the Kaliwa Dam project even if it skipped several requirements.

“The Commission is concerned about allegations of faked consultation reports and approval from the indigenous community to push through with the project,” CHR explained. “The free prior and informed consent (FPIC), as embedded in the indigenous peoples’ right to self-determination, is necessary to any activity that affects their ancestral lands, territories and natural resources.”

“The right to free consent implies equally the right to dissent. If indigenous peoples are clearly opposed to a particular project, their decision should be respected and they should continue to benefit in the same way as other peoples from State benefits, development plans and services,” CHR added.

When water concessionaires in Metro Manila were forced to employ water rationing measures, they blamed the dipping water levels at the Angat Dam, Ipo Dam, and La Mesa Dam. Finance Secretary Carlos Dominguez III claimed that the Kaliwa Dam would solve all of these problems.

However, groups said the dam’s construction would displace IPs from their ancestral lands.

“We urge the National Commission on Indigenous Peoples to ensure that genuine and rights-based processes of securing the FPIC of the affected communities are followed in all stages of the consultation. Likewise, the Commission supports the proposal to conduct a congressional hearing on the dam project to air the grievances of the Agta-Dumagat-Remontado communities,” CHR noted.

“Apart from displacement of local communities and the Agta-Dumagat-Remontado population, the Commission warns the government of the possible irreversible damage to the biodiversity of the Sierra Madre and the Kaliwa Watershed, which is a declared forest reserve and wildlife sanctuary,” it added.