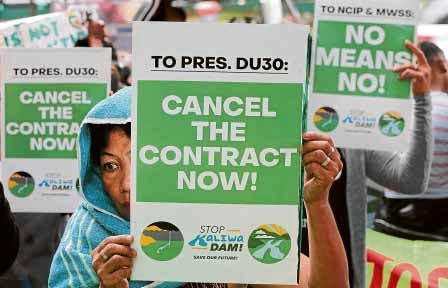 NOTODAM Environmental activists assail the Kaliwa Dam project in a picket in front of the Department of Environment and Natural Resources in this photo taken last week. GRIG C. MONTEGRANDE

MANILA, Philippines — The Department of Environment and Natural Resources (DENR) has issued an environmental compliance certificate (ECC) for the P18.7-billion Kaliwa Dam project in Quezon province, amid fierce opposition from environmental groups and indigenous communities that decried its risks and irregularities.

One of the Duterte administration’s big-ticket projects to be funded by Chinese loans, the Kaliwa Dam is touted as the solution to the water shortage in Metro Manila and nearby provinces.

News about the release of the ECC came as the two private water concessionaires in Metro Manila and adjacent towns and cities in Rizal and Cavite provinces announced service interruptions because of the falling water level at Angat Dam in Bulacan. (See story in Metro, Page A10)

“With the issuance of this ECC, you are expected to implement the measures presented in the EIS intended to protect and mitigate the project’s adverse impacts on community health, welfare and the environment,” read the letter signed by EMB Director Metodio Turbella.

Turbella added that environmental considerations should be incorporated in all phases and aspects of the project and that the EMB would periodically monitor the project to ensure compliance.

The ECC is among the requirements needed to proceed with the construction of a gravity dam on Kaliwa River, which will cover a reservoir surface area of 291 hectares, with a gross reservoir volume of 57 million cubic meters at full supply level.

Securing this certificate allows the project to proceed to the next stage, which is to obtain permits from pertinent agencies so construction and implementation can begin.

For groups resisting the project, the promise of easing the water shortage woes in Metro Manila and nearby provinces comes at an unfair exchange of destroyed ecosystems and environmental risks in Teresa and Tanay in Rizal and General Nakar and Infanta in Quezon.

“Everything is being done to get this project approved,” said Catholic priest Pete Montallana, head of the Save Sierra Madre Network Alliance.

He said the DENR did not consider the reactions that his group had submitted.

“Neither did it study the EIS really well and scientifically,” said the priest, also spokesperson for Stop Kaliwa Dam Network, an alliance of around 50 organizations opposing the project.

In issuing the ECC, the EMB laid down conditions for the MWSS, covering concerns ranging from environmental issues to people’s livelihood and indigenous peoples’ (IP) rights.

The MWSS, for instance, should conduct an effective information, education and communication program to all its stakeholders, including contractors, workers and local residents, to inform them of mitigating measures in the EIS and the conditions of the project.

Other conditions include the conduct and submission of actual inventory and assessment of threatened species that may be affected during clearing operations, development of an integrated watershed management plan, and adoption of mitigation measures as cited in EIS to protect the Tinipak Spring and Tinipak White Rocks.

Six months after receipt of the ECC, the proponent should also submit a duly signed memorandum of agreement with concerned local governments for a social development program.

It should also ensure that sacred sites and burial grounds, as well as the culture and livelihood of the IPs, are preserved.

Montallana said the DENR did not take into consideration the “manipulations and lies” perpetrated against indigenous Dumagat tribes, which face displacement from ancestral lands once the dam’s construction begins.

Montallana said five out of six indigenous community clusters voted against the project during assemblies under the free and prior informed consent process.

An executive summary prepared by the EMB for the public said the project would “indirectly impact” 56 IP households and would place 284 IP households at risk of flooding and other effects of possible dam failure.

“Aside from the degradation to our environment, there is the danger that China will gain a foothold in our territory,” Montallana said.

Critics earlier assailed the “onerous” deal with Beijing over the dam.

In August, the Commission on Audit called the bidding for the project a “negotiated contract” from the start, after only Beijing-owned conglomerate China Energy Engineering Corp. Ltd. was qualified in the process.