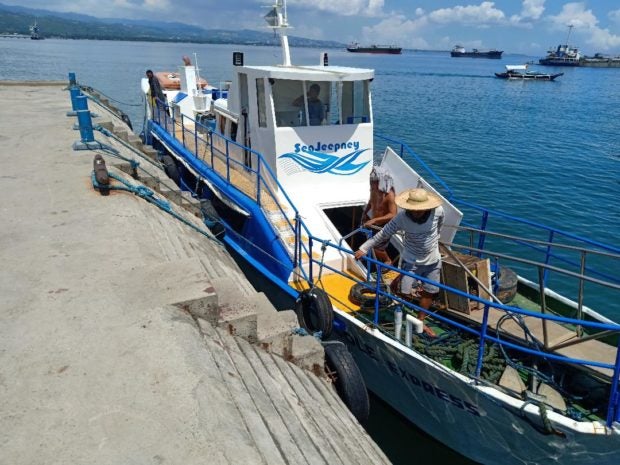 CEBU CITY, Philippines — With traffic congestion now part of daily life in this city, Cebuanos have the option to sail on “sea jeepneys” to reach their destinations.

The new commuter service will open for people traveling from the port of southern Naga City to Pier 1 here on Oct. 28, according to Nelson Mejia Jr., chief executive officer of MCE Shipping Lines.

Mejia said the company’s first sea jeepney, the MV Nicole Express, could carry 45 to 60 people and would help ease traffic congestion in the city.

“We start doing little things to help our community,” he told the Inquirer on Monday. “The riding public should try it. Just imagine inhaling fresh air instead of pollution. And above all, one can [avoid] traffic.”

Mejia said a one-way trip, which costs P60, will take 45 minutes to an hour. There will be 10 trips a day between Naga and Cebu, a distance of 23.5 kilometers by car.

“With at least 45 seats, we can fit in passengers equivalent to three jeepneys. Imagine if those jeepneys travel by land? They are exposed to daily traffic. I hope this sea jeepney can help,” Mejia said.

“For now, only one vessel was approved by Marina (Maritime Industry Authority). But I want to have more sea jeepneys so I can serve more people,” he said

“My business is purpose-driven, and I hope people can benefit from this mode of transportation. I simply want to be of service to people,” he added.

But Mejia said they had to revise the ship’s design because of shallow waters on the route.

On Oct. 14, the provincial board declared a “traffic crisis” in Cebu as the daily commute and land travel were taking hours. Local legislators said the situation was of a “public calamity magnitude.”

The board also wanted the national government to fast-track the infrastructure projects that were supposed to help solve the growing traffic problem in Metro Cebu.