Dread builds in Vietnam over fate of missing UK migrants 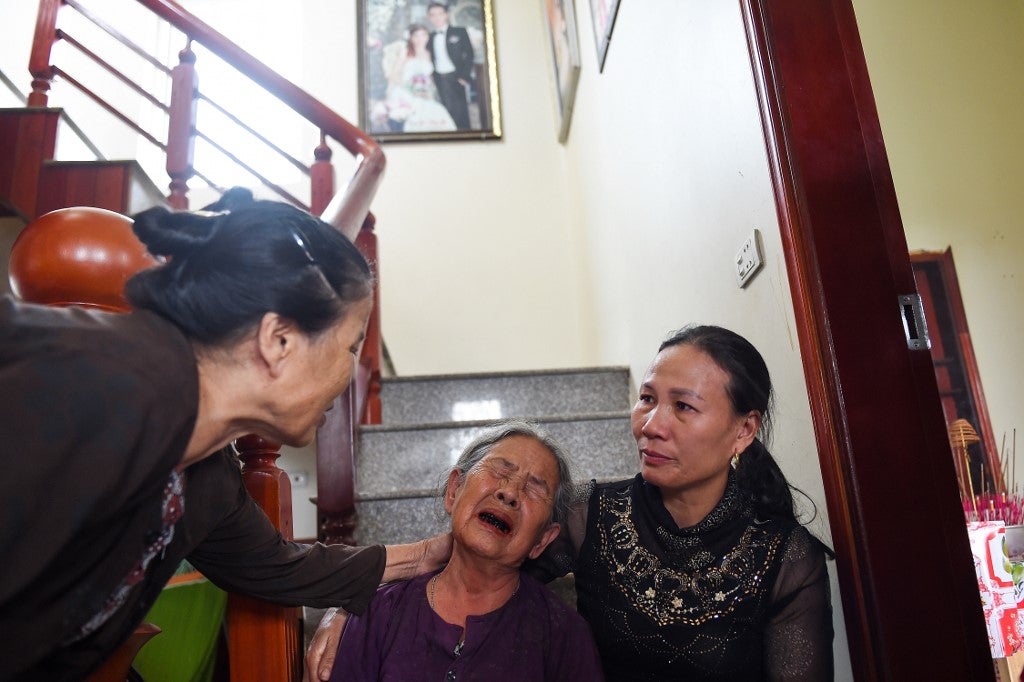 Tran Thi Hue (C), grandmother of 30-year old Le Van Ha, who is feared to be among the 39 people found dead in a truck in Britain, is consoled by relatives inside their house in Vietnam’s Nghe An province on October 27, 2019. (Photo by NHAC NGUYEN / AFP)

NGHE AN, Vietnam — Dread mounted across Vietnam on Sunday as relatives of migrants feared to be among 39 people found dead in a truck in Britain revealed new heart-wrenching details of their last contact with their loved ones.

The driver of the refrigerated trailer discovered in an industrial park on Wednesday has been charged with 39 counts of manslaughter and people trafficking in a case that has shocked Britain and cast light on the extreme dangers facing illegal migrants seeking better lives in Europe.

The 31 men and eight women were initially believed to be Chinese, but several Vietnamese families have now come forward with fears their relatives are among the dead.

Many are believed to have come from impoverished villages in central Vietnam, where some families now fear the worst.

Le Minh Tuan has not heard from his son Le Van Ha since a message over Facebook around a week ago saying “I’m about to board a car to Britain. I will contact the family when I arrive in England, Dad.”

That was two days before the refrigerated trailer stuffed with bodies was discovered in Essex, east of London.

“We’ve heard no news from him since,” Tuan told AFP, his eyes red from crying.

“For sure he was in that lorry. I just want my son’s (body) back home,” he said in Yen Hoi village, Nghe An province.

The 30-year-old left his two young sons and wife in Vietnam in June, travelling to Turkey then Greece and France en route to the UK.

“He wanted to go to pay the debts… and send money back to his kids so they would have a better life,” said his father, clinging to his grandson and weeping.

Nearby, the mother of missing 28-year-old man Vo Ngoc Nam said she had not yet heard anything on the fate of her son, who had been working in Romania and planned to travel to Britain.

“I have been waiting anxiously over the past few days for any news from him, but we got nothing,” the stricken mother told AFP.

Villagers planned to gather for Sunday mass later in the day to pray for the 39 victims.

Central Vietnam is a common feeder for illegal migrants chasing promises of riches overseas. Many end up working in Britain illegally in nail bars or on cannabis farms, heavily indebted and subject to exploitation.

Five people have so far been arrested in Britain in connection with the tragedy, the country’s largest murder probe since the 2005 London suicide bombings.

Essex police say they want to fast-track the process of fingerprint identification and DNA testing, but said it would take time.