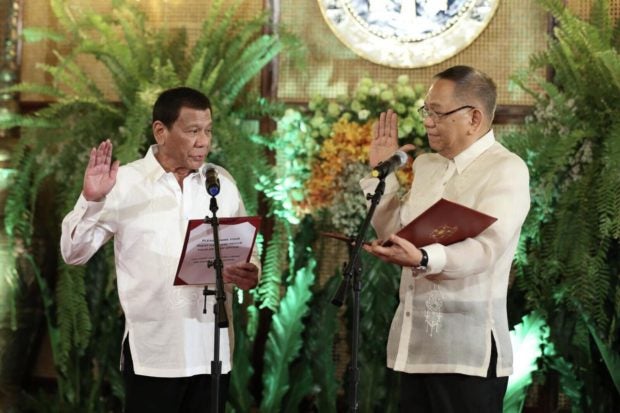 President Rodrigo Duterte administers the oath of office to newly appointed Chief Justice Diosdado Peralta during a ceremony at Malacañang on Thursday, Oct. 24, 2019.

Duterte’s spokesman Salvador Panelo said the President administered the oath of office to Peralta in a ceremony held in Malacañang.

Panelo said Duterte told Peralta that “all he asks is that the Supreme Court under his watch should be characterized with fairness and truth.”

“That every citizen be treated equal before the law regardless of the status in life,” Panelo said, supposedly quoting Duterte as saying.

Malacañang earlier said the Supreme Court would continue to be independent under Peralta, who was a former Sandiganbayan Associate Justice who convicted former president Joseph Estrada of plunder.

“We are certain that with Chief Justice Peralta at the helm of the Supreme Court, the Judiciary will continue to be well-managed as it thrives to uphold the principles of judicial excellence, integrity and independence,” Panelo said.

Peralta was also a former Regional Trial Court Judge in Quezon City and got the monicker “hanging judge” for sentencing around 40 people to death.