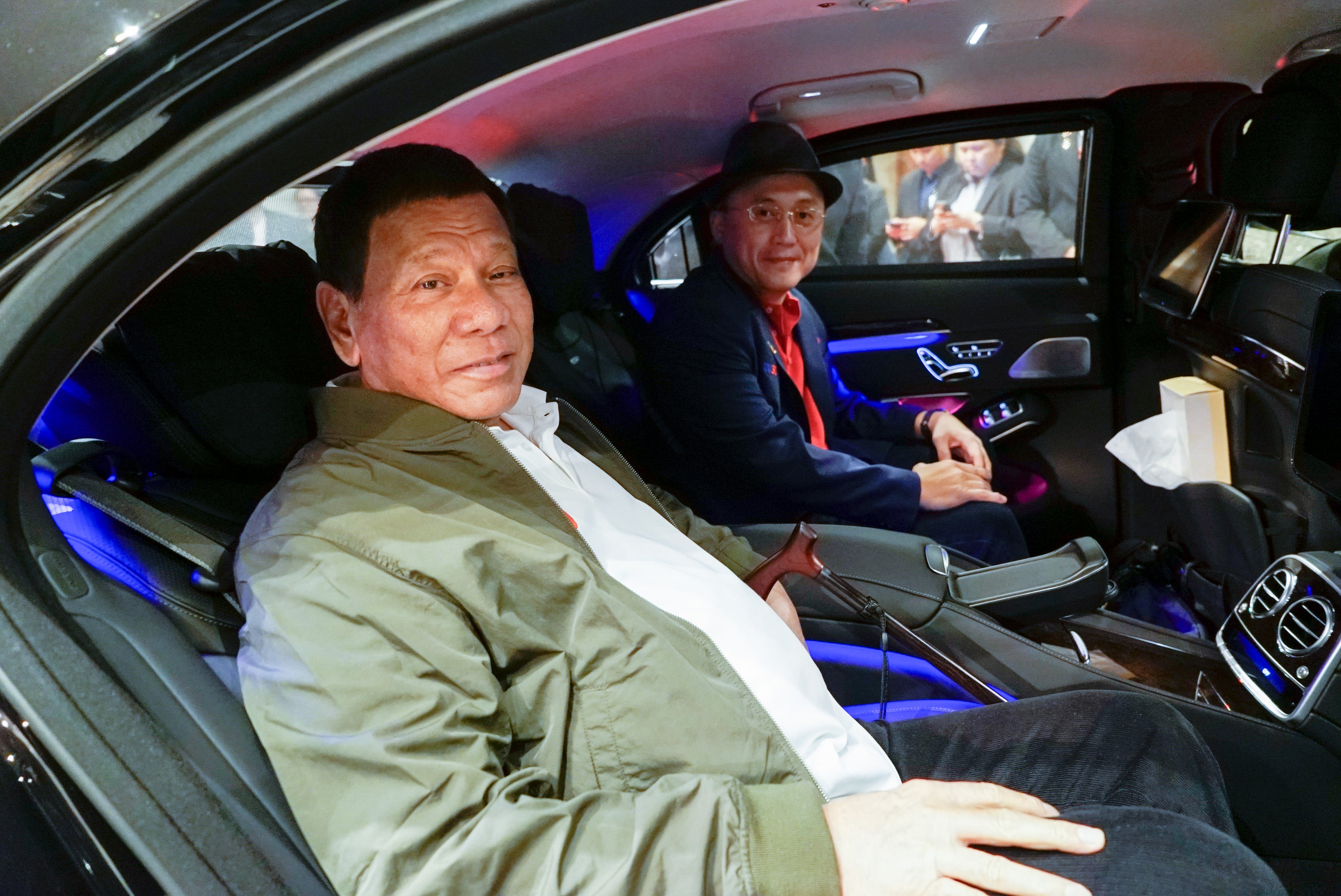 President Rodrigo Roa Duterte and Senator Christopher “Bong” Go pose for posterity while on board a vehicle going to the Haneda International Airport following the President’s attendance to the Ceremonies of the Accession to the Throne of His Majesty Emperor Naruhito at the Imperial Palace on October 22, 2019. KING RODRIGUEZ/PRESIDENTIAL PHOTO

The “unbearable pain” in President Rodrigo Duterte’s lower back that forced him to cut short his visit to Japan and use a cane to walk was just caused by “muscle spasms” and not by any serious spinal problem, Sen. Christopher “Bong” Go said on Wednesday.

Go, the President’s former longtime aide, said he accompanied the President to a hospital after visiting the wake of the late Senate President Aquilino “Nene” Pimentel Jr. in Taguig City, where they had gone straight from the airport after attending the enthronement of Emperor Naruhito of Japan on Tuesday.

Go said the President consulted a neurosurgeon and underwent a magnetic resonance imaging (MRI) exam to see what’s causing his back pain, which the President began to feel after a motorcycle accident on Thursday.

“We immediately consulted his neurosurgeon and doctors. He had an MRI. There was nothing to be worried about. The doctors said it was purely muscle spasms,” he added.

Go assured the public that the 74-year-old leader would be transparent about his medical condition, but declined to identify the hospital where the President was examined.

“We were actually worried that his spine was affected. But thank God it was not serious. The doctors wanted to see if it was a trapped nerve that caused the pain, but it was not,” Go said.

“But he has to take medicines and he was advised to rest,” he said, adding that the President  asked him to buy a cane after arriving in Tokyo on Tuesday.

The President fell off a motorcycle at the Presidential Security Group compound on Thursday, getting light bruises and scratches on his elbow and knee.

On Tuesday, Malacañang said “unbearable pain” in the back forced the President to cut short his trip to Japan, returning home right after the ceremony for Naruhito’s enthronement.

Presidential spokesperson Salvador Panelo repeated on Wednesday that the public had nothing to worry about the President’s health.

“His consultation with a doctor is aimed at determining the medical condition of his body, as well as finding out whether his previous spinal injury from a past motorcycle accident has been aggravated by his recent fall,” Panelo said in a statement.

“The President shall inform our countrymen on the result of his medical consultation,” he said.

In a radio interview, Panelo said the President told him he started to feel pain in his lower back while brushing his teeth on Tuesday.

The President described the pain as “excruciating, searing,” Panelo said.

Panelo said the President needed to use a cane when he went to Naruhito’s enthronement.

But the President began to feel better later in the day, and he was able to go to Pimentel’s wake after arriving in Manila, though still using his cane, Panelo said.

The President’s real health condition had been the subject of fervent speculation since the 2016 race for Malacañang.

A former drinker and smoker, the President had previously admitted that he had Buerger’s disease and Barrett’s esophagus, and was suffering from migraines and a spine injury due to a motorcycle accident several years ago.

Last year, the President disclosed that he had tested negative for cancer.

But speculation about his health persists because of his disappearances from public sight that lasts for days.

Go, who had been at President Duterte’s side since he was the mayor of Davao City, would often share photos of the President resting in his home as proof-of-life images.

Talk about his physical condition again became a major topic on social media after he was seen wearing a necklace-like “personal air purifier” when he met visiting Indian President Ram Nath Kovind in Malacañang last week.

Panelo said the white rectangular gadget was intended to protect the President from “persons within his proximity who have coughs and colds.”

Some of the President’s key allies in the Senate urged him to be more cautious about his day-to-day activities and to refrain from strenuous physical exertion.

“My appeal to him as a fellow Mindanaoan and … as the leader of the country… is to restrain himself from such dangerous activities so that he can complete his [six-year] term for the good of the country,” Senate Majority Leader Juan Miguel Zubiri said.

Senate President Vicente Sotto III said he believed the President’s back pain was not life-threatening, claiming that his wife, Helen, actually underwent a medical procedure after complaining of a similar condition.

“If the President has something like that, it’s treatable. I don’t see any problem with that,” Sotto said.

Although the Senate leader said Malacañang had been “forthright” about the President’s health, allowing doctors to release official medical bulletin would be “more accurate.” —With a report from Leila B. Salaverria