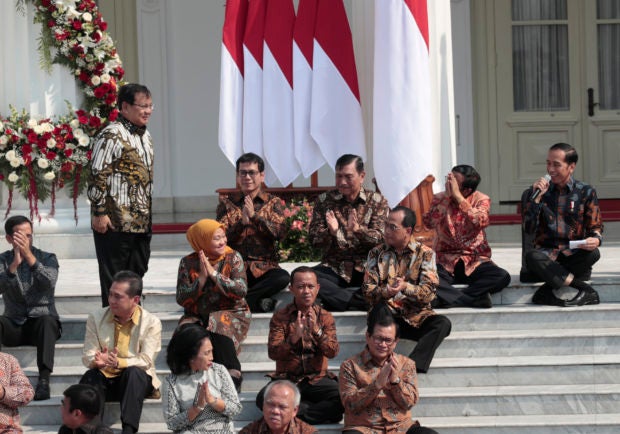 Newly appointed Defense Minister Prabowo Subianto, who is the former rival of Indonesian President Joko Widodo in last April’s election, stands up as he is introduced by Widodo, right, during the announcement of the new cabinet at Merdeka Palace in Jakarta, Indonesia, Wednesday, Oct. 23, 2019. (AP Photo/Dita Alangkara)

The lineup also features politicians from Widodo’s governing coalition who supported his victory in the divisive April election. Widodo, 58, was sworn in Sunday for his second and final five-year term with pledges to champion democracy and take bolder actions against poverty and entrenched corruption in the world’s fourth-most populous country.

At the announcement in the presidential palace, Widodo asked his Cabinet and institutional heads to fight graft by creating a system to close off any chances of corruption.

“Don’t be corrupt!” Widodo told the ministers. “Be serious at work, and for those who are not serious, I would take them out of this (Cabinet),” Widodo warned.

Defense Minister Prabowo Subianto, 68, has lost two presidential elections to Widodo, is a former special forces general, and the founder and leader of the Gerindra political party. The party’s deputy chairman, Edhy Prabowo, was named the minister of maritime and fishery.

Widodo, who is popularly known as Jokowi, had repeatedly said Indonesians should unite after the bitter election campaign. He and his defeated election rival met in July for the first time since the April poll and Subianto had been negotiating with Widodo’s governing coalition for Cabinet positions, signaling a calming of political tensions.

Subianto initially refused to accept the election results, and nine people died in post-election riots in Jakarta. The country’s top court found no substance to his allegations of massive and systematic fraud and rejected his challenge to the election results in June.

Subianto has been linked to human rights abuses during the authoritarian rule of longtime President Suharto, and he has allied himself politically with groups that want Islamic rather than secular law to prevail in Indonesia. He won big in conservative provinces, but mainstream Muslim organizations and minority voters backed Widodo, who secured 55.5% of the vote in official results.

In other Cabinet appointments, Sri Mulyani Indrawati, who was managing director at the World Bank, was reappointed finance minister. She was also finance minister from 2005-2010.

Popular reformist Indrawati, 57, was praised for overhauling a corrupt taxation department and guiding the economy through the 2008 global financial crisis and current global economic slowdown.

The 35-year-old Nadiem Makarim, CEO and co-founder of ride-hailing startup company Gojek, was named education and culture minister, and Erick Thohir, 49, a former owner of the Inter Milan soccer club was named minister of state-owned enterprises.

Indonesia, the world’s most populous Muslim-majority nation, is an outpost of democracy in a Southeast Asian neighborhood of authoritarian governments and is forecast to be among the world’s biggest economies by 2030.

Widodo has been widely praised for his efforts to improve Indonesia’s inadequate infrastructure and reduce poverty, which afflicts close to a 10th of the nearly 270 million people. /gsg