HONG KONG – A murder suspect whose case indirectly led to Hong Kong’s ongoing protests was freed from prison on Wednesday and told reporters he was willing to surrender to authorities in Taiwan, where he is wanted for killing his girlfriend. 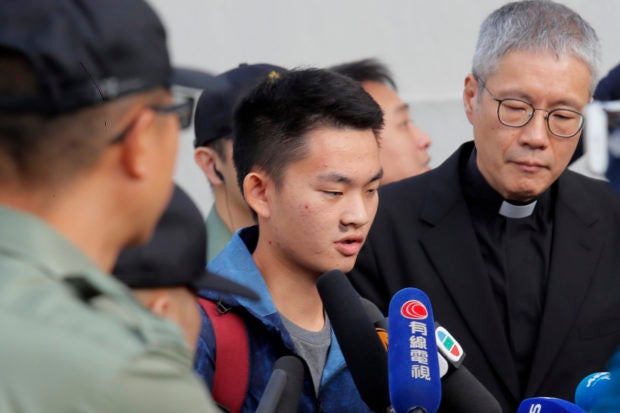 Chan Tong-kai, center, talks to the media as he is released from prison in Hong Kong Wednesday, Oct. 23, 2019. Chan, who’s wanted for killing his girlfriend last year on the self-ruled island, had asked the Hong Kong government for help turning himself in to Taiwan after his sentence for money laundering offenses ends on Wednesday. (AP Photo/Kin Cheung)

Chan Tong-kai was released after serving a separate sentence for money laundering offenses. He could not be sent to Taiwan because the semi-autonomous Chinese city of Hong Kong has no extradition agreement with self-ruled Taiwan.

“I am willing, for my impulsive actions and things I did wrong, to surrender myself, to return to Taiwan to face sentencing and stand trial,” he said.

He bowed deeply twice to the media scrum waiting outside the prison, thanked his parents for their support, apologized to the victim’s family and the people of Hong Kong, then got into a waiting van.

Reporters gave chase, broadcasting live as the van made its way to an upscale gated apartment complex that they could not enter.

Hong Kong’s leader Carrie Lam had offered extradition legislation earlier this year to close what she called a “loophole” but the bill sparked widespread protests over concerns it put residents at risk of being sent into mainland China’s murky judicial system.

In the days leading up to his release, Hong Kong and Taiwan feuded over his case after Lam said Chan had offered to return voluntarily to Taiwan.

Taiwan objected to allowing him the freedom to travel and instead offered to send a team to escort him back, but Hong Kong’s government refused, saying Taiwanese officers could not enforce the law in Hong Kong.

Taiwan’s Mainland Affairs Council said Wednesday that allowing a murder suspect to fly on his own would ignore the safety of other passengers and that Hong Kong’s approach makes Hong Kong “a criminal paradise where murderers can walk around.”