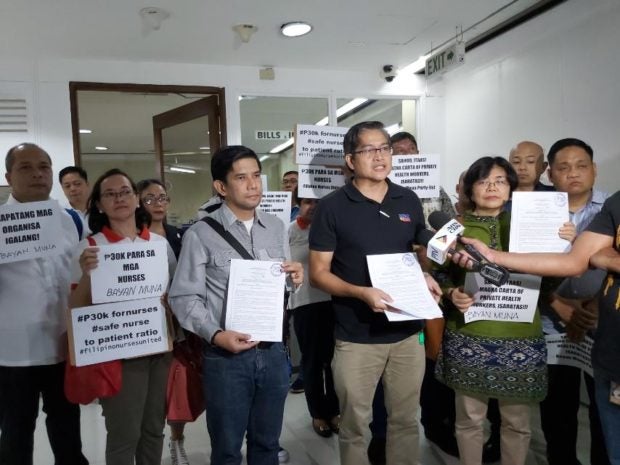 MANILA, Philippines — A proposed law that seeks to set the entry salary of nurses in private healthcare facilities at P30,000 per month and stipend of P750 per day for other health workers has been filed at the House of Representatives.

House Bill No. 5184 also seeks to prohibit contractualization, understaffing, and work overloading of health staff. It also aims to set a reasonable workload of eight hours a day or 40 hours a week but paid seven days a week or a total of 56 hours a week as per Republic Act No. 5901.

Gaite said the enactment of the proposed law is urgent and crucial as the country faces a health crisis. He also lamented that the salaries of most health workers are way below the daily minimum cost of living pegged at P1,205 per day or P36,150 per month for a family of six.

“This crisis is the crisis of being overworked, underpaid, and being deprived of job security and union rights. Marami rin ang kontraktwal sa kanila (A lot of them are also contractual workers),” Gaite said in a statement.

In the bill’s explanatory note the Bayan Muna solons noted the disparity in income between health workers in public and private health facilities. Private health workers, they noted, “are not covered by Republic Act No. 7305 or the Magna Carta of Public Health Workers of 1992, hence do not receive benefits like hazard pay, subsistence allowance, laundry allowance, and longevity pay, among others.”

“For instance, while a Nurse 1 in a public hospital earns P20,754 per month, their counterpart in a private hospital earns as low as P6,000 or P9,000 per month, which is even less than the P537/day minimum wage in the National Capital Region or P11,814/month,” the Makabayan bloc lawmakers added.

The congressmen also noted 2016 data from the Philippine Statistics Authority which showed that out of the 137,173 workers in the private health and social work activities industries that have 20 or more workers, 19,501 were non-regular.

Of these non-regular workers, they said 11,188 or 57.3 percent were probationary status, while casual workers and contractual workers made up about 20 percent of the employees in the non-regular category numbering 3,962 and 3,707, respectively. The remaining 3 percent of those employed in the said category are seasonal workers or apprentices. /kga