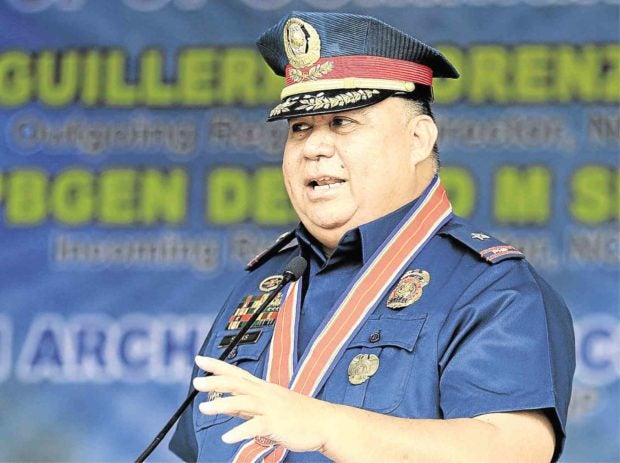 STEPPED-UP CAMPAIGN NCRPO chief Police Brig. Gen. Debold Sinas wants his men to go after high-value targets as he ordered the war on drugs to be intensified. —RICHARD A. REYES

“We will change the approach. We will focus more on high-value targets. I’m not banning the arrest of small-time [suspects] who [are] found in possession of small sachets [of drugs]. I’m saying we should lessen this because the effort [spent] in arresting and filing cases against [small-time drug personalities] is the same [as that of] high-value targets,” Sinas said.

He explained that suspects found in possession of small amounts of illegal drugs (up to 0.99 grams of “shabu” or crystal meth) “automatically get a plea bargain.”

This is based on a Supreme Court resolution which aims to give small-time drug users a chance to reform. Those caught selling over a gram of shabu, however, cannot enter into a similar arrangement.

“In Central Visayas, if the arrest is like that (small-time), it’s like it has no impact. Why is it that police arrest only small-time [drug personalities]?” Sinas told reporters who chanced upon him at the Manila City Hall.

Danao had just been appointed the Calabarzon police regional director.

Shortly after his appointment as Metro Manila police chief, Sinas said that among his priorities was to get rid of misfits in the NCRPO.

Weeding out errant lawmen has also been the focus of the PNP officer in charge, Lt. Gen. Archie Francisco Gamboa, due to the “ninja cops” controversy hounding the national police force over a 2013 drug bust in Mexico, Pampanga.

A similar scandal was also reported in Manila where 16 ninja cops were linked to alleged drug queen, Barangay 484 Zone 48 chair Guia Gomez Castro. According to authorities, the rogue policemen protected Castro and sold her part of the drugs they had seized in their operations.

An investigation conducted by the Bureau of Immigration, however, showed that Castro was able to leave the country for Bangkok on Sept. 21.

Data from the NCRPO showed that of the 16 so-called ninja cops, nine were already dead, while one was detained on drug charges. The rest were either retired, dismissed or Awol (absent without leave).

Sinas told Domagoso to call him “anytime there [was] an erring policeman in your city.” “Sometimes, the area is chaotic because the policeman has been neglecting his duties,” he observed.

Balba, the new MPD chief, said that he would ask his men to strictly implement the city’s ordinances to improve the peace and order situation.

The former head of the Eastern Police District (EPD), Balba was relieved in March for command responsibility after members of the EPD drug enforcement unit were accused of extorting money from the family of a detained drug suspect.

Balba said that to avoid extortion cases in the MPD, he would constantly remind his subordinates not to engage in illegal activities.