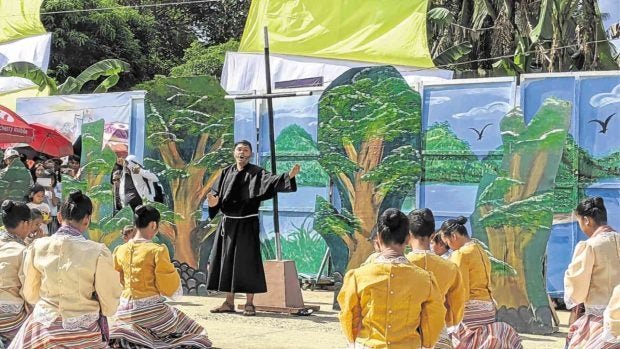 MAGALLANES, Sorsogon, Philippines — Teresita Dogaojo, 66, sitting under a tent outside the rebuilt Gibalon Shrine at Sitio Gibalon in Barangay Siuton here, was intently listening to Papal Nuncio Gabriele Caccia’s homily on Saturday as townsfolk commemorated the 450th anniversary of the first Mass held on mainland Luzon.

From time to time, she would write on her notepad.

“I wrote down what the Papal Nuncio said because his words were true, like there were so many things that kept us busy, but we were not truly happy,” Dogaojo said.

It was the third time that Dogaojo, a catechist from Bacon district in Sorsogon City, attended the celebration in Magallanes, where Augustinian missionary, Fray Alonso Jimenez, in October 1569, celebrated the first Mass in Luzon in a community then known as Hibal-ong during an expedition sent by Miguel Lopez de Legazpi.

Saturday’s Mass marking the event was celebrated by Caccia together with Bishops Arturo Bastes of Sorsogon, Manolo de los Santos of Catanduanes and Jose Bantolo of Masbate.

“Four-hundred fifty years ago, somebody came from very far and as we have seen just now, what did they find? They found people [who were] welcoming,” Caccia said, talking about the reenactment of the first Mass that greeted him and other guests, including Spanish Ambassador to the Philippines Jorge Sanchez and Sorsogon Gov. Francis Escudero.

“The people (locals) understood that they were indeed hungry [after a] long voyage, so the people gave [them] food. Generosity,” Caccia said.

He said that in exchange, “God gave them something more—faith.”

The Papal Nuncio, in his homily, called on the faithful to share their faith.

“You know, what we received is the gift of love,” he said. “Love is always open to the other. Get outside and reach the other people. When you love, you get out of yourself.”

He also said that Catholics must reach out to those who “need the love of God.” Most of these people, he said, have plenty of properties but with poor relations and lots of contacts but without real communication.

Professor Danilo Gerona, a local historian who has written about explorer Ferdinand Magellan, the Bicol clergy and several towns in the Bicol region, said the people in Sorsogon who joined the first Mass were more accepting of Christianity than those on the nearby island of Masbate.

“We have more accounts of Fray Jimenez coming here because this was used as a base for the spread [of Christianity] to the rest of Luzon,” Gerona told the Inquirer.

He said a report in the 1570s showed there was a large population in the area where the first Mass was held. That, aside from the abundance of provisions, including gold, may have attracted the Spanish chaplain to favor this part of Luzon over Masbate.

In an earlier Inquirer report, Gerona said Jimenez was appointed to serve as missionary to the islands of Masbate, Leyte, Samar and Burias (an island under Masbate’s territory), where he preached and converted the natives to Catholicism.