PH still among global laggards in fight vs TB 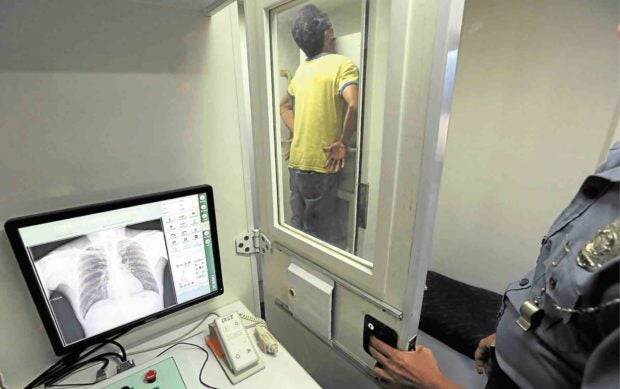 RECURRING ILLNESS A Quezon City Jail inmate undergoes an X-ray examination as part of a screening program checking the spread of tuberculosis in this 2015 file photo. —INQUIRER PHOTO

Apart from coping with a surge in measles and dengue cases, as well as the reemergence of polio after almost two decades, the Philippines  ranks fourth among countries with the highest incidence of tuberculosis (TB), according to the World Health Organization (WHO).

Based on WHO’s 2019 Global Tuberculosis Report (available at who.int/tb/publications/global_report/en/), an estimated 591,000 Filipinos fell ill last year from tuberculosis, accounting for 6 percent of the 10 million global total, surpassing figures in low middle-income countries like Nigeria and Bangladesh.

Of that number, around 26,000 died of TB in the country. Another set of fatalities, reaching around 600, is classified in the report under “HIV-positive TB mortality,” referring to those who also contracted the human immunodeficiency virus.

Tuberculosis incidence in the Philippines hasn’t seen a significant decline since 2007, according to WHO.

As such, the Philippines found itself fourth in a list of eight countries which accounted for two-thirds of the global tuberculosis total. India ranked first at 27 percent (2.7 million), followed by China (9 percent or 866,000) and Indonesia (8 percent or 845,000). Pakistan, Nigeria, Bangladesh and South Africa trailed the Philippines as estimated cases from these countries ranged from 301,000 to 562,000.

Because tuberculosis cases have been “relatively stable in recent years,” WHO said that the world is “not on track to reach the 2020 milestones of the End TB Strategy.”

By next year, tuberculosis incidence should have declined by 20 percent. But as of last year, according to the report, total reduction only stood at 6.3 percent. Deaths due to this respiratory disease were also expected to have dropped by 35 percent by 2020, but as of 2018, mortality dropped by only 11 percent.

Apart from the timely diagnosis and treatment of tuberculosis, WHO said that among the ways to drive down the number of cases were reducing “health-related risk factors,” such as smoking, diabetes and HIV infection, providing preventive treatment to those with latent TB infection, as well as addressing the “broader determinants of tuberculosis infection” like poverty and undernutrition.

It also highlighted the need to ensure that all infants in “high-burden countries” — a category in the report where the Philippines is also classified — are provided the BCG (bacille Calmette–Guérin) vaccine to protect them against tuberculosis.

In contrast to the slow decline in TB cases, BCG coverage in the Philippines has had a considerable drop to 61 percent last year from a high of 91 percent in 2011, according to the report.

A communicable but curable disease, tuberculosis is caused by the bacillus Mycobacterium tuberculosis. This is spread when people who contracted tuberculosis expel bacteria into the air through coughing.

Of the 591,000 estimated TB cases, WHO said only 372,000 Filipinos were notified of their condition while the rest were “not notified or diagnosed.”

Of these known cases, only 63 percent are receiving treatment.

“This gap is due to a combination of underreporting of detected cases and underdiagnosis [that is] people with tuberculosis do not access health care or are not diagnosed when they do,” WHO said.

Of the three-million case gap worldwide, the Philippines accounts for around 8 percent of the total, behind such countries as India (25 percent), Nigeria (12 percent) and Indonesia (10 percent). It is also one of 10 countries which account for 75 percent of the global gap for treatment enrollments.

“In these countries, intensified efforts are required to improve reporting of detected tuberculosis cases and access to diagnosis and treatment,” WHO said.

The report also pointed out that allocating funds to address tuberculosis should improve, given that the pace of progress “is not yet fast enough.”

In the case of the Philippines, WHO said that of the $205-million (P10.5-billion) budget needed for an efficient tuberculosis program, 63 percent remains unfunded, while 25 percent is shouldered by international organizations. Only 12 percent of the budget is shouldered by the government.

“Efforts to mobilize additional funding from domestic sources and international donors need to be urgently stepped up …. Progress in reducing the burden of tuberculosis requires adequate funding sustained over many years,” WHO said.

In August, Global Fund and the United States Agency for International Development committed to continue providing the Department of Health with technical assistance, supplies and human resources to fast-track efforts against tuberculosis programming in the country. This is on top of the over P3 billion worth of projects from the United States for the Philippines’ National Tuberculosis Control Program.

Health Secretary Francisco Duque III had said earlier that by the end of the Duterte administration in 2022, the government would have found and treated around 2.5 million tuberculosis patients.