Video games ruin studies? But here they are studied

But in De La Salle’s College of St. Benilde (CSB), students spend hours in front of the computer with the main objective of crafting the perfect game — as part of the school requirement.

While playing computer, mobile and console games has been associated with slacking off, the gaming industry is nothing less than competitive.

Professional gamers battle for hefty sums in world championships: Johan “N0Tail” Sundstein recently became the most successful esports player after winning $3 million in The International 2019 Dota 2 competition in Shanghai. Lead game developers are raking up dollars in the hundreds of millions.

Markus Persson, the designer who created the construction game Minecraft, sold it to Microsoft for $2.5 billion. Melvyn Morris and Riccardo Zacconi, creators of Candy Crush Saga, were among the richest video game moguls in 2015. Morris’ fortune was estimated at $627 million, and Zacconi’s, $548 million.

“Games are fun, so making them is fun,” says Filipino designer Benjo Pacia. “In the end, it’s still software development, and people who don’t know get surprised by the amount of work that has to be done. Especially with designers since it seems like we just think ‘what would be fun’ then just do it. It’s a discipline into itself that takes practice and experience, like any other creative and technical occupation.”

Pacia is a designer for mobile and blockchain games based in the Philippines. His role can either be content design for puzzle games with a combat, magic or weapons element, or even system design and mobile games.

“The booming industry is great, but due to that, the competition is fierce and people have only so much money to spend to watch ads. It’s really about surviving long enough to bring you over the top to have the space to experiment and get users,” he says, adding:

But designing the next addicting video game is not as easy as leveling up.

This is one reason “patience and grit” are the major requirements for animation and game design students at CSB.

The campus on Taft Avenue in Manila has been offering a new wave of programs catering to a new set of content creators since the late 2000s.

Game design, or Bachelor of Science in Interactive Entertainment and Multimedia Computing, was the first course of its kind in the country when it was introduced in 2009. A decade later, as mobile gaming reaches new heights due to the popularity of smartphones, CSB offers two tracks: game development and game art.

In game development, students are taught how to conceptualize different types of games; in game art, they become “technical artists” who focus on the visual side but are also equipped with programming skills.

But the course is more difficult and time-consuming compared to beating Contra with just one life.

“Making games are different from playing games,” says program chair Abet Ongkingco. “That’s why the course is very difficult. We have a lot of math, algebra, trigonometry, physics.”

Just because a person is obsessed with games does not mean he or she is automatically a good fit in the program, Ongkingco adds. Half of the students’ stay in school will be spent developing their game, from high-concept document or the proposal, to the presentation.

And the process is not always an automatic levelup. Most students had to restart their projects in the middle of the term for various reasons.

Students develop their projects in computer laboratories like no other. Equipped with top-of-the-line hardware, such as high-end Acer Predator and Alienware computers, the multicolor LED-lit classrooms look more like a gamer’s dream come true than a standard university computer room.

On top of that, the students get to play games during class—for educational purposes, of course. To learn JavaScript and Python, they log on to game-based computer science program CodeCombat. 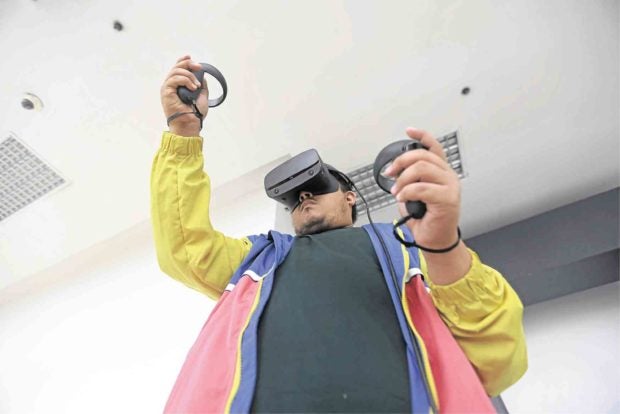 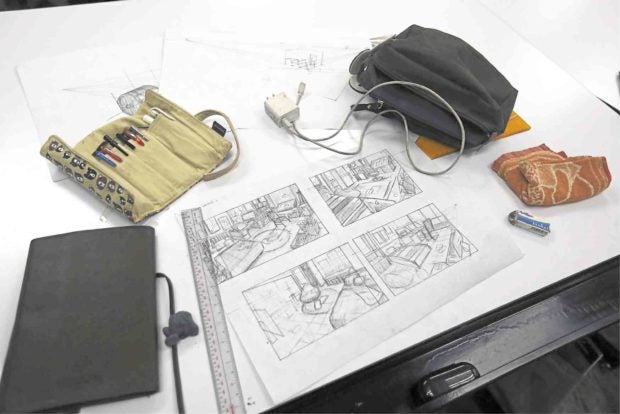 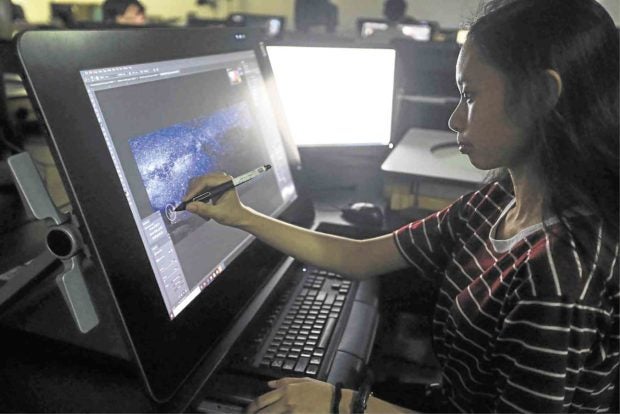 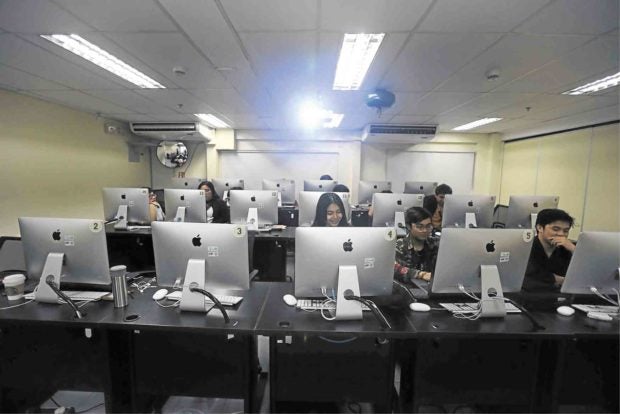 CREATING THE PERFECT GAME De La Salle-College of Saint Benilde has been offering game art and development courses since the late 2000s, the first of their kind in the country, amid the rising popularity of smartphones and esports competitions that put up hefty prize money. —PHOTOS BY REM ZAMORA

Recently, CSB alumni won Best Game, Best Game Art and Best Narrative of the Story at the Animahenasyon for Tulak, a decision-based adventure game (think “Bandersnatch”), which unlocks a narrative of the Philippines’ war on drugs.

Some students have developed the award-winning virtual reality game Yellow Boat, which simulates how kids in rural areas cross rivers and climb mountains just to get to school.

“The industry is so competitive,” and the CSB program has been keeping up with developments in the industry, says Ongkingco. “CSB provides half of the industry.”

Aside from addicting triple A games, Facebook and smartphones have paved the way for a new set of gamers—the female market. Currently, the $170-billion gaming industry has plenty of room to grow, says Ongkingco.

“There is a need to establish more studios, and a lot of [studios] are setting up now,” he says. Video game company Ubisoft—creator of Assassin’s Creed, Just Dance and Prince of Persia—has a studio in the City of Calamba, Laguna province.

Meanwhile, cyberathletes are limbering up to compete in six esports events in the upcoming Southeast Asian Games.

Not only in entertainment

Animation also has a strong demand in the Philippines, and it’s not just boxed into the entertainment industry.

Says Patrick Astilla, chair for the animation program: “Animation caters to anything that needs visual content.”

Explainer videos, medical animation and architecture are just some of the industries that use this type of digital art to impart knowledge, stories and presentation.

But like game design, animation is a rigorous process that demands not only talent but also patience for endless revisions and sleepless nights.

“Animation is not for everybody,” says Astilla, an alumnus of the program. The skills required of an animator are different from those required of an illustrator or comic artist.

“Whatever is happening in the real world, we’re mimicking it, we’re making illusions, so it’s actually part of animation,” says Ongkingco, who also studied animation.

For a whole year, students are required to produce three to five minutes of animation. Each of them starts from preproduction, which includes the script and storyboard, before moving on to production and finally to postproduction.

Throughout their stay in CSB, students learn about 2D and 3D animation. These arts students are also equipped with high-end computers, like Wacom monitors, which allow them to directly draw on the screen.

At one of the computer labs, sophomore Nathan Vargas does an animation of a girl who is trying to sneak around.

“What’s easy is drawing the body, but people are clothed and they have hair, and that’s harder to animate because they are fluid, while the body is a bit easier,” she tells the Inquirer.

Animation was Vargas’ obvious choice in college due to the specific skills taught in the program.

“I’ve always liked art and animation,” she declares. “Animation is like movies, short films. It’s about stories where, in Multimedia Arts, it’s about graphics that can be an accessory for a website.”

Animation students from CSB have also made their mark in the Philippine media industry.

In 2017, “Diskarte,” a satire on the state of the Philippine public transport system, won awards like the Gawad Alternatibo of the Cultural Center of the Philippines and the grand prize for the short animated film in Animahenasyon.

To fuel the students’ imagination and creativity, they are urged to do intensive research, Astilla says.

“One-fourth of the time should be spent on research,” he says. “They should not be checking on other people’s output because they’re at the risk of copying. They should instead look for the source—history, context—and find the inspiration there.”