Little ‘earth defenders’ get trained to save environment 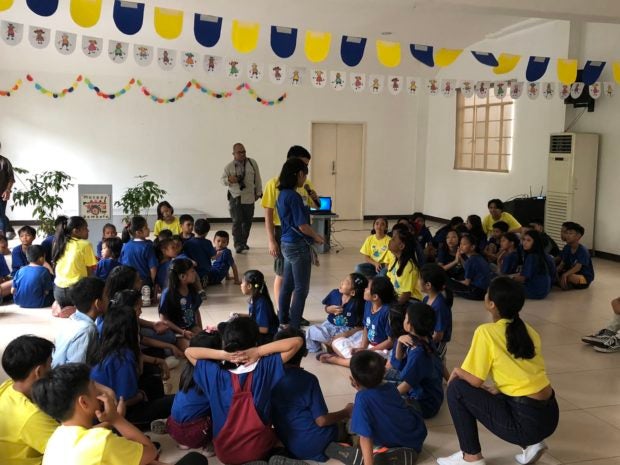 MANILA, Philippines — The so-called little earth defenders will soon learn what it takes to protect their right to a sustainable and cleaner environment.

At the Children’s Rights Summit on Saturday, over 80 children advocates gathered at Museo Pambata to understand their right to a livable planet and to learn creative ways to save the environment.

The summit is a brainchild of the European Union Delegation to the Philippines which collaborated with the Museo Pambata as they mark the 30th Year of the Convention on the Rights of Children.

In an interview with INQUIRER.net, Museong Pambata Executive Director Maricel Montero said the 80 earth defenders would undergo activities to teach them how to help save the environment.

“It is their right as a child to have a clean and safe environment so it is important for them to understand their rights that was given to them,” Montero said, speaking partly in Filipino.

Facilitating the summit are Giovanni Seritella, program manager for environment of the EU Delegation to the Philippines;  Komunidad X artists; and Museo Pambata personnel.

Since Oct. 12, the EU has already been educating 12 children aged nine to 14 from various schools in Manila and Angono, Rizal on what they could do to address environmental problems.

According to the EU Delegation, the summit is unique as the facilitators are children trained by the EU.

Montero said they collaborated with different organizations to choose urban poor children who live in unhealthy and dirty areas in the cities.

With the popularity of Swedish environment activist Greta Thunberg, Montero said it would be timely for other children to show what they could do to protect the environment.

“We want to show them that even if they are little kids, they can do so much more for the environment. After all this is Greta Thunberg’s time. We want them to stand up for what they need, what they want,” Montero said in Filipino.

Among the activities the summit, was a boodle fight, Montero said was included to show the children it would be possible to eat without using plastic or styrofoam utensils.

“They need to understand that the styrofoam should not be used. Or if the styrofoam is still there, we don’t have a choice but to be a responsible user of plastic. So we recycle it,” she said.

Clyde Enriquez, one of the trainers for the children, said Thunberg became a big part of the summit because Thunberg defended her rights to a sustainable environment.

In a United Nations (UN) Climate Action Summit in New York City, an emotional Thunberg told world leaders: “We are in the beginning of a mass extinction, and all you can talk about is money and fairy tales of eternal economic growth. How dare you!”

Tasha and Bella Tanjutco, country representatives of Bye Bye Plastics Philippines, help children create art installations to show the volume of plastics that harm the ocean in the Philippines.

The Tanjutco siblings tasked children-advocates to create an art installation which is a large green fishnet with plastics and other wastes sticking on it. The siblings said the plastics are trash found by the children in their homes.

Bella said their goal is to assist children in understanding that the future is at risk due to the amount of plastic scattered in the country’s waters.

“Our purpose to teach and educate the kids on the climate crisis and how their plastic trash and waste affects the environment,” Bella told INQUIRER.net in a chance interview.

Bella also noted that the fish net installation’s purpose is to “show people how the fish feel like and reality of how our oceans are today.”

The art installation will be put up in Museo Pambata for the whole month of October. Siblings said the fish net is a message of the kids to the adults to see the big picture of how plastics had become a risk for the environment.

According to the Global Alliance for Incinerator Alternatives, Filipinos are dumping more than 163 million plastic sachets daily.

Time for adults to listen

Montero also called on adults to follow their children in maintaining a sustainable environment for the next generations.

“During our time, no one taught us that plastics are bad for the environment. We understand that. We accept that. But now that we know that it is not good maybe we need to accept it and do something about it for the sake of our children,” Montero said.

Enriquez said she hoped that even as children they could have the ability to become proactive for the environment instead of challenging adults.

“What can we do as children, what we have right now, especially, we have this opportunity to learn about the woes of climate change instead of challenging the adults,” Enriquez said.