Some worries about nuclear weapons at Turkey base 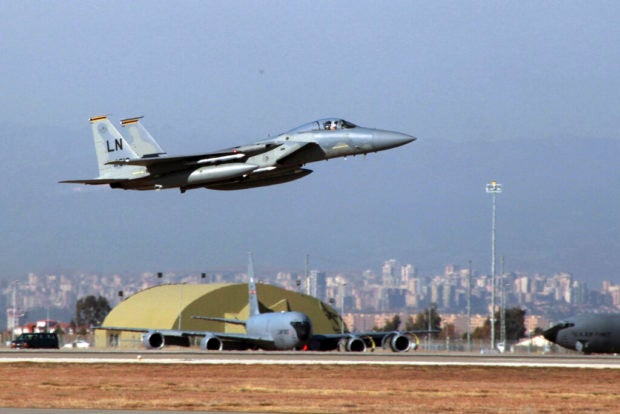 In this Dec. 15, 2015, file photo, A U. S. Air Force F-15 fighter jet takes off from Incirlik Air Base near Adana, Turkey. Frayed U.S. relations with Turkey are raising a sensitive question rarely discussed in public: Should the United States remove the nuclear bombs it keeps at a Turkish air base? There is no known evidence that the weapons are at direct risk, but President Donald Trump has threatened to “obliterate” Turkey’s economy if it does not halt its invasion of Syria, and some American arms control experts say the bombs would be safer elsewhere. (AP Photo)

WASHINGTON — Frayed U.S. relations with Turkey over its incursion in Syria raise a sensitive question rarely discussed in public: Should the United States remove the nuclear bombs it has long stored at a Turkish air base?

It’s a tricky matter for several reasons, including the fact that by longstanding policy, the U.S. government does not publicly acknowledge locations of nuclear weapons overseas. Still, it is almost an open secret that the U.S. has as many as 50 B-61 bombs stored under heavy guard at Incirlik air base in southern Turkey.

President Donald Trump implicitly acknowledged the stockpile this week when asked by a reporter how confident he was of the bombs’ security.

Turkey, a NATO ally, has reportedly hosted American nuclear weapons for 60 years. The bombs could be dropped by U.S. planes in a nuclear war. The arrangement at Incirlik air base is part of NATO’s policy of linking Turkey and other member countries to the alliance’s aim of deterring war by having a relatively small number of nuclear weapons based in Europe. Removing them, therefore, would be a diplomatic complication.

There is no known evidence that the nuclear weapons at Incirlik are at direct risk, but relations between Washington and Ankara are at perhaps a historic low and the war in Syria has grown more complex and unpredictable. Incirlik is about 150 miles from Syria by road.

Thursday’s announced U.S. deal with Turkey to pause its offensive against Kurdish fighters in northern Syria may have slowed the deterioration of relations. But the overall direction has been decidedly and increasingly negative.

“The arc of their behavior over the past several years has been terrible,” Defense Secretary Mark Esper said last Sunday, noting that Ankara defied repeated U.S. warnings not to purchase a Russian air defense system that the White House has likened to a portal for Russian spying. He added: “I mean, they are spinning out of the Western orbit, if you will.”

In July, the Pentagon kicked Turkey out of its F-35 fighter jet program because Turkey refused to halt its purchase of the Russian-made air defense system. This was a major blow to U.S.-Turkey relations and raised questions in Washington about whether Turkey was a reliable ally.

Eric Edelman, a former U.S. ambassador to Turkey and senior Pentagon official, said Friday he believes the nuclear weapons are safe and secure. He sees risk in removing them.

“I’m not in favor of taking any actions that would potentially accelerate Turkey’s thinking about pursuing its own independent nuclear deterrent,” he said, noting that Erdogan as recently as September mentioned this possibility.

Some American arms control experts say the U.S. bombs at Incirlik would be safer in another NATO member country.

Hans Kristensen of the Federation of American Scientists, who has followed the issue for many years, said in an interview that a review of options for the U.S. bombs at Incirlik, near the city of Adana, is long overdue. He believes the Air Force, which is responsible for the bombs, has grown concerned about their security in recent years.

“The Air Force is concerned about not only the standard physical perimeters — whether they are good enough — but also about the manpower on the base, whether they have enough to hold back an attack from someone,” Kristensen said.

The conflict in northern Syria, which has only grown more complex and unpredictable with a U.S. troop withdrawal, has added a new layer of worry for American officials, he said.

“They’re afraid of the spillover” inside Turkey, he said.

The Pentagon has declined to comment on the matter.

“It is U.S. policy to neither confirm nor deny the presence or absence of nuclear weapons at any general or specific location,” said Air Force Lt. Col. Uriah Orland, a Pentagon spokesman. “The U.S. does not discuss the movement of nuclear weapons, the capability to store weapons at U.S. or foreign locations or planning for any of these activities.”

Even private experts who study the matter are not sure how many weapons are stored there, but Kristensen believes there are up to 50 B-61 bombs designed to be dropped by U.S. fighter aircraft. He says the U.S. has had nuclear weapons in Turkey continuously since 1959.

The bombs in Turkey are part of a network of roughly 150 U.S. air-delivered nuclear weapons based in Europe. Kristensen says the host countries, in addition to Turkey, are Belgium, Italy, Germany and the Netherlands.

Turkish President Recep Tayyip Erdogan said Friday he and Trump share “love and respect,” but he also let little doubt that he was offended by an Oct. 9 letter from Trump telling Erdogan, “Don’t be a fool!”

Erdogan told reporters Trump’s words were not compatible with “political and diplomatic courtesy” and would not be forgotten. He said he would “do what’s necessary” about the letter “when the time comes.” He did not elaborate. /jpv