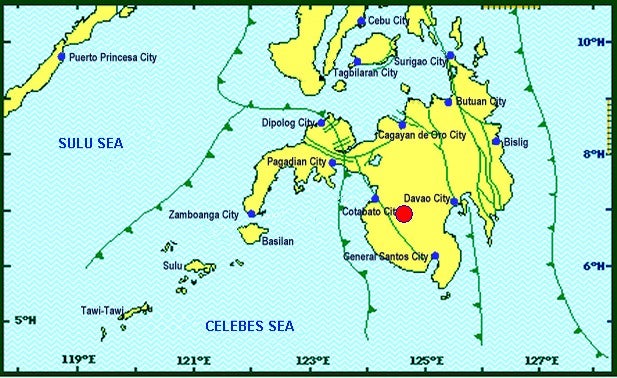 The magnitude 5 quake centered 27 kilometers southeast of Tulunan town in Cotabato, the Philippine Institute of Volcanology and Seismology reported.

There were no immediate reports of damage or injury from the tremor that struck 6:52 a.m. at a shallow depth of 12 kilometers. Shallow quakes tend to cause more damage than deeper ones.

The earthquake, an aftershock of Wednesday’s 6.3 magnitude tremor, was felt strongest at Intensity IV in Malungon, Sarangani and Koronadal City in South Cotabato.

Instrumental Intensity III was recorded in Kidapawan City, General Santos City, Alabel town in Sarangani, Tupi town in South Cotabato and Davao City. It was felt at Intensity I in Kiamba, Sarangani.

On Wednesday night, a large area of Mindanao was jolted by a 6.3-magnitude quake, prompting residents to dash out of homes and shopping malls in panic, triggering a mall fire and leaving several areas without power.

As of 5 p.m. Friday, Phivolcs recorded 551 aftershocks but most of them were too weak to be felt. A 4.3 magnitude aftershock struck  23 kilometers northwest of Tulunan town, Cotabato at 9:45 p.m. Friday.