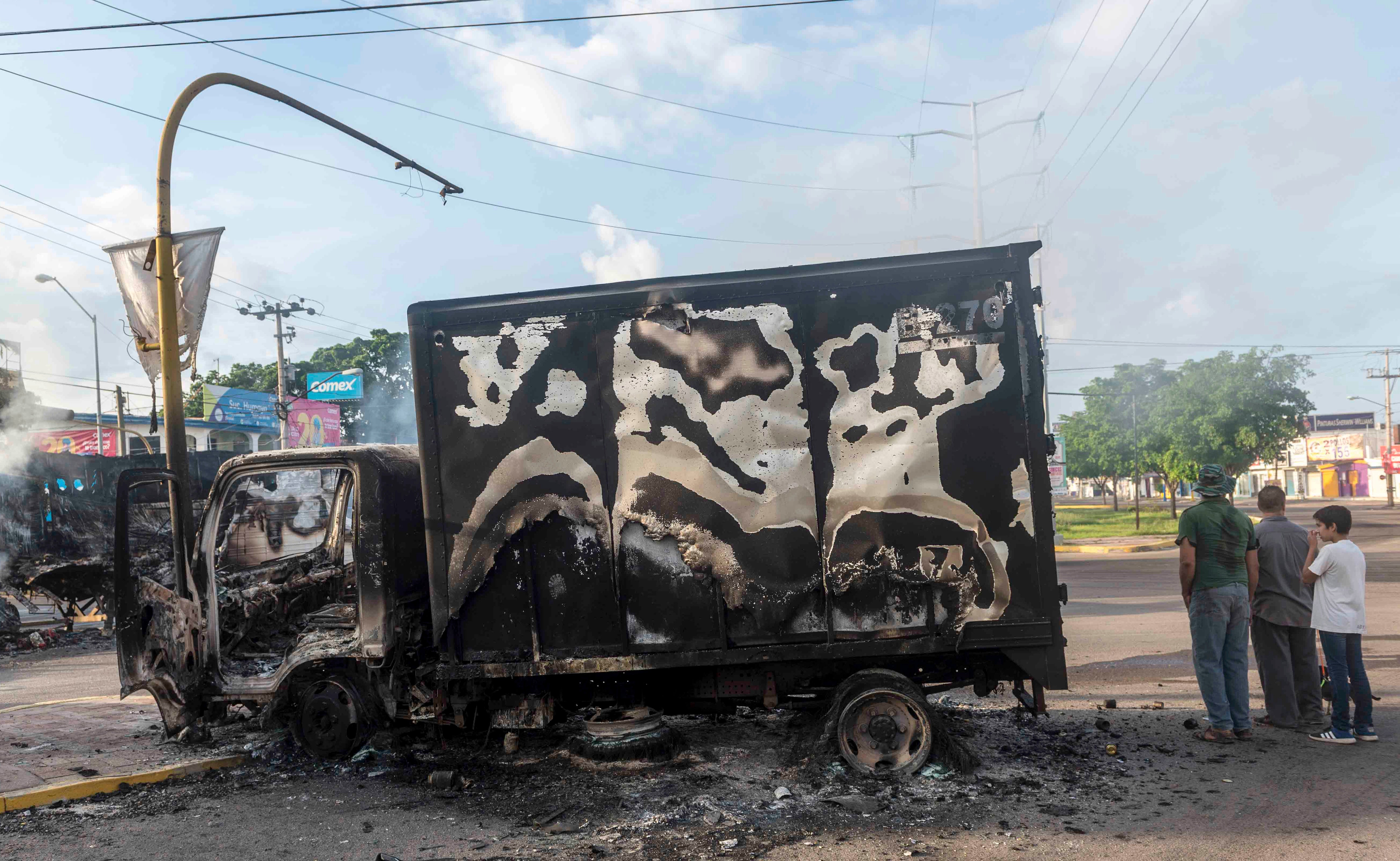 A burnt out truck used by gunmen smolders on an intersection, a day after street battles between gunmen and security forces in Culiacan, Mexico, Friday Oct. 18, 2019. Mexican security forces backed off an attempt to capture a son of imprisoned drug lord Joaquin “El Chapo” Guzman after finding themselves outgunned in a ferocious shootout with cartel enforcers that left at least eight people dead and more than 20 wounded, authorities said. (AP Photo/Augusto Zurita)

It was the third bloody and terrifying shootout in less than a week between security forces and cartel henchmen, raising questions about whether President Andrés Manuel López Obrador’s policy of avoiding the use of force and focusing on social ills is working.

López Obrador defended the decision to back down, saying his predecessors’ strategy “turned this country into a cemetery, and we don’t want that anymore.”

But Mike Vigil, a former chief of international operations for the U.S. Drug Enforcement Administration who worked undercover in Mexico, called the violence “a massive black eye to the Mexican government” and a “sign that the cartels are more powerful” than it is.

Streets in Culiacan, a city of over 800,000, remained blocked with torched cars Friday morning, schools were closed, and some public offices asked their employees to stay home. Few buses were running.

Teresa Mercado, who had just returned to her native Culiacan on Thursday, said: “This is worse than what I had lived through years ago.”

Authorities said 35 troops arrived at a home Thursday afternoon to arrest Ovidio Guzmán López on a 2018 extradition request from the U.S. They entered the home, where Guzman and three others were inside.

Amid the chaos, inmates at a prison rioted, seized weapons from guards and fled. Fifty-six prisoners escaped, and 49 were still at large Friday, according to Sinaloa Public Security Secretary Cristóbal Castañeda. Two guards were taken captive and later freed.

The attacks were so brazen that Sinaloa cartel gunmen took several soldiers hostage and even attacked the housing complex where soldiers’ wives and children live.

Videos on social media showed a scene resembling a war zone, with gunmen, some in black ski masks, riding in the back of trucks and firing mounted machine guns as smoke rose above the cityscape. People ran for cover as gunfire rattled around them, and motorists drove frantically in reverse, trying to escape the bullets.

Five attackers, a member of the National Guard, a civilian and a prisoner died in the gun battles, Cresencio Sandoval said. He said seven members of the security forces were wounded and eight held captive before being released unharmed.

The government’s security cabinet made the decision to withdraw the troops to avoid greater loss of life.

“The capture of one criminal cannot be worth more than the lives of people. They made the decision and I supported it,” López Obrador said. He added: “We do not want deaths. We do not want war.”

Security cabinet officials said they were not informed about the operation beforehand. They said troops surrounded the house without a search warrant and came under fire before one could be delivered, at that point deciding to enter without the warrant. And they said the troops underestimated the cartel’s response.

Sandoval said that if the security cabinet had known about the operation, it would have gone about it differently and deployed more troops and even sent air support.

“This group … rushed things. It did not consider the consequences,” he said.

It was not clear what happened to Guzmán after the troops left. Federal Security Secretary Alfonso Durazo said he was never under formal detention.

José Luis González Meza, a lawyer for the Guzman family, said Friday that the Guzmán family would cover the expenses of those wounded and killed.

“In this case, the family apologizes to the people of Sinaloa, and particularly to the people of Culiacan,” González Meza told a news conference in Mexico City. “They will take care (of the expenses) of the wounded and the dead … however many there were, man, no problem, they will help them economically.”

José Reveles, the author of several books on the Sinaloa cartel, said the operation was done clumsily from both an operational and a political standpoint.

At the same time, he allowed that “doing a surgical operation there is impossible; the strength of the Sinaloa cartel was made clear.”

Vigil, the former DEA agent, worried that the retreat could lead to more bloodshed.

“This is going to set an example for the other groups,” Vigil said. “It sends them the message that if they capture a member of the cartel, all they have to do is go in the city and intimidate the citizenry and security forces.”

The elder Guzman is serving a life sentence in the U.S. after being convicted last February of industrial-scale drug trafficking.

Ovidio is not one of the drug lord’s best-known sons. Iván Archivaldo Guzmán and Jesús Alfredo Guzmán are known as “Los Chapitos,” or “the little Chapos,” and are believed to be running their father’s cartel together with Ismael “El Mayo” Zambada.

But Ovidio Guzmán was indicted in 2018 in Washington, along with a fourth brother, on charges of trafficking cocaine, methamphetamine and marijuana.

Gun battles between gangs and security forces are relatively common in Mexico, but this week has seen three notable and frightening clashes. On Monday, 13 police officers were killed in a cartel ambush in the state of Michoacán, and the following day soldiers killed 14 gunmen while losing one of their own in neighboring Guerrero state.   /muf