Duterte wears ‘air purifier’ to protect him from persons with cough, colds 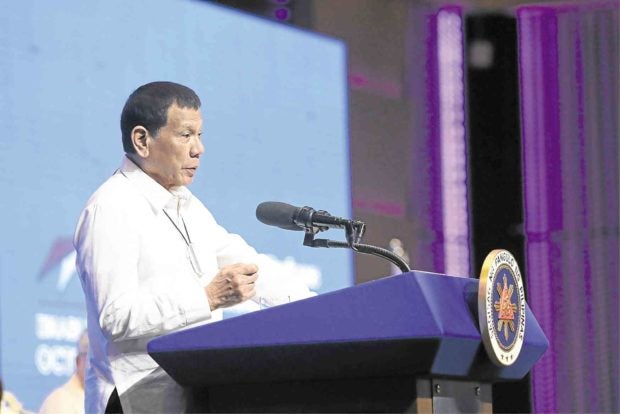 CLEAR THE AIR President Duterte’s strange neckpiece turns out to be a portable air purifier meant to filter out the air of impurities, such as dust, pollen, smoke and other allergens. Mr. Duterte’s state of health has raised concerns on whether he’s fit enough to continue leading the country. —JOAN BONDOC

MANILA,Philippines — Nope, that’s neither an amulet nor a fashion accessory, presidential spokesperson Salvador Panelo said of the white rectangular object, about the size of a calling card, that President Rodrigo Duterte has been wearing like a pendant the past week.

It’s a personal, wearable “air purifier” meant to protect Mr. Duterte from “persons within his proximity who have coughs and colds,” Panelo said in a text message on Friday.

The President was wearing the peculiar-looking neckpiece during Friday’s courtesy call of Indian President Ram Nath Kovind in Malacañang.

Mr. Duterte, 74, was also seen wearing it earlier this week at the launch of a coal power plant in Taguig City, and at a business conference in Manila. Last week, he wore it during a Cabinet meeting.

The portable gadget helps improve the quality of air around the user by filtering it of contaminants, such as dust, pollen, smoke and other allergens. It is usually marketed as being beneficial to those suffering from allergies and asthma.

Duterte had earlier disclosed that he had Barrett’s esophagus, Buerger’s disease, migraines and a spine injury from a motorcycle accident.

He also said he was undergoing regular blood tests, and had a colonoscopy and endoscopy last year.